New giant funnel bins are being installed at motorway service areas across the North West in a bid to reduce the amount of litter dropped on the region’s roads. 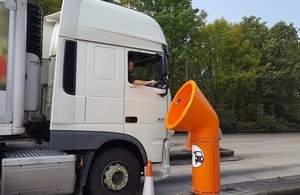 Highways England is providing the bins as part of a North West initiative to tackle littering after over 40,000 sacks of rubbish had to be collected from motorways in the region last year – an average of 108 sacks for every mile of motorway.

The window-height bins are being installed at around a dozen service areas in the North West over the next few months, and the first bins have been installed at Lymm Services by the M6 in Cheshire this week.

Two different sizes of bins are being installed – ranging from 1.8 to 2.2 metres high – next to Give Way lines at the exit to service area car parks. The bins allow both car and lorry drivers to reach the half-a-metre-wide funnels from their vehicles’ windows.

"We’re committed to tackling littering on our network and are installing the funnel bins at service areas in the North West. The bins offer another opportunity for road users to dispose of their rubbish responsibly within service areas.

"Our teams of workers do a fantastic job removing litter from motorways every year but we’d much rather they were able to spend more of their time carrying out maintenance work.

"The new giant funnel bins will make it much easier for drivers to get rid of their litter as they won’t need to leave their vehicles, and I’d urge drivers to either use the bins on the network or to take their litter home with them."

It costs taxpayers an estimated £40 for each sack of litter collected from motorways – roughly the same cost as fixing a pothole.

Litter poses a risk to other drivers if it lands on windscreens, causes a threat to wildlife and leads to flooding if drains become blocked so litter picking is regularly carried out across the network.

Rubbish has to be collected close to fast-moving traffic – putting workers at risk – and lane closures are often needed, causing needless disruption to drivers.

Paul Cooper, 46 from Bolton, has been collecting litter from motorways in the North West for 19 years as part of his job as a maintenance worker for Balfour Beatty Mott MacDonald. Paul’s other duties include filling potholes, repairing safety barriers and clearing drains. He said:

"I think most drivers who sling litter out their windows don’t really think about what they’re doing, and that someone like me has to come along and clear up after them. It tends to be worst on slip roads or where there’s standing traffic, as that’s when drivers seem to decide to have a clear out of their cars.

"There’s always an element of risk when you’re working on the network as you’re near traffic so my message to drivers is please stop dropping litter and use the bins or take it home with you instead."

The bins are being installed as part of a North West litter initiative, which also involves trialling new signs with the message ‘Workers lives are put at risk picking your litter’ and carrying out extra litter picking patrols to help tackle the issue.

CCTV footage has also been released which shows a lorry driver discarding an oil container at the side of the M62 near Rochdale after pulling over to the hard shoulder to add oil to his vehicle’s engine. The footage is available to watch at https://youtu.be/5kwOY-kBuAI