Firefighters in England are approximately 95% male and white. The Home Office is launching a new campaign to help fire and rescue services change that 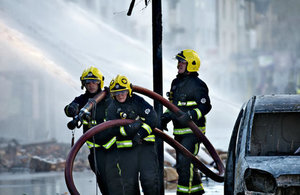 Only 5.2% of firefighters in England are women, and 3.9% are from an ethnic minority background (BAME).

Join the Team: Become a Firefighter will combine a fitness guide encouraging more women to serve, as well as mythbusters and real stories of serving firefighters, all to shift the perception of what the role involves.

The fitness guide, Community, Protection, Prevention, Teamwork, makes it clear that the role is accessible to people from all backgrounds, with examples of the tests applicants need to pass.

"Forget what you see on TV – being a firefighter is not always about carrying people out of burning buildings. As fires have become less common, the role is becoming more about engaging with communities and doing work to prevent fires from happening in the first place.

"So if you care about your community and enjoy connecting with people, then give a taster day a go.

"I am always impressed by the bravery and dedication of firefighters. But it’s time for the workforce to fully reflect the public it serves."

Mythbusters will also be published later in the year to clear up common misunderstandings around the role.

These will be directed to those in all sectors of the community that have not previously considered a career in the fire and rescue services. For example, they will challenge the idea that only men can do the job, making clear that women have worked as part of fire and rescue services for decades and have risen to the very top of the profession, with 6 female fire chiefs now across the country.

With bespoke taster sessions for women, simultaneously providing insight into the role and tackling myths about the career; as well as fitness sessions, targeted adverts on social media, and pre-recruitment courses, West Midlands Fire Service (WMFS) has shown what a future firefighting workforce can look like.

But the government is clear that more progress needs to be made across England.

Join the Team: Become a Firefighter, which has been developed with support from the National Fire Chiefs Council (NFCC), Local Government Council and Inclusive Fire Service Group, is designed to support fire and rescue services to attract a more diverse range applicants in their upcoming recruitment drives.

"I am delighted to see this new campaign from the Home Office encouraging a more diverse fire service, which the NFCC has helped to develop. Real life case studies of women, BAME firefighters and their experiences will help to bust the myths of what the role of a modern firefighter is.

"We have a number of highly inspirational female staff and we want to encourage more women to join the fire service; to do to this we need to get away from the image of a male-dominated sector, with traditional masculine roles.

"The fire service is accessible to everyone, regardless of gender, background and ethnicity; this new campaign will hopefully encourage more people to apply to become firefighters. It also gives important information on the fitness standards – which can often be perceived as a barrier – and showcase what a varied role it can be. While we are seeing the number of women in the fire service increasing, we want to ensure we are continuously building on this and developing a fire service that is representative of the communities we serve."