‘Give Pudsey your round pounds’, new partnership urges 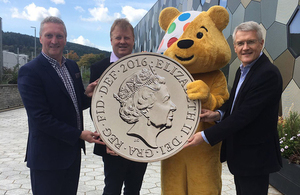 Today (20 September) it was announced that BBC Children in Need will be partnering with The Royal Mint and HM Treasury on their £1 coin campaign, joining forces for Pudsey’s Round Pound Countdown.

With less than four weeks to go before the round £1 stops being accepted in shops and restaurants, BBC Children in Need is encouraging everyone to check their piggy banks, empty coat pockets and dive down the back of sofas to dig out any lurking round pound coins.

A new poll* suggests that six in ten of us would like to donate our remaining round pounds to charities, like BBC Children in Need. With one in three people still having these coins stashed away in savings jars and piggy banks, the message is clear – dig them out, head over to your local drop-off point and donate them to BBC Children in Need’s 2017 Appeal!"

"We are really excited to work with The Royal Mint and HM Treasury for Pudsey’s Round Pound Countdown and hope that as many people as possible will get involved in this nationwide treasure hunt and put their old round pounds to good use. Every round pound donated will go on to make a real difference to the lives of disadvantaged children and young people across the UK.

"Any round £1 coins donated to BBC Children in Need through Pudsey’s Round Pound Countdown will not only go to a fantastic cause but they will make their way back to The Royal Mint where some will be melted to make new £1 coins."

"Over the last few months, we have urged the public to spend, bank or donate their round pounds ahead of the October 15 deadline. We are delighted to partner with BBC Children in Need, and are encouraging everyone who can, to promise their round pounds to Pudsey."

BBC Children in Need’s vision is that every child in the UK has a childhood that is safe, happy and allows them the chance to reach their potential. The charity is currently supporting over 2,400 projects in communities across the UK that are helping children and young people facing a range of disadvantages such as living in poverty, being disabled or ill, or experiencing distress, neglect or trauma.