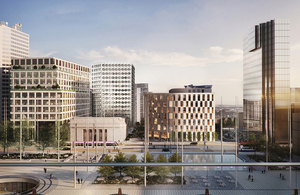 Thousands of public servants in the West Midlands will move to a state of the art new building in central Birmingham, as the government continues its drive to modernise its office estate and deliver growth to every corner of the UK.

HMRC working with the Cabinet Office has signed a 25 year lease to take 238,988 sq ft at 3 Arena Central, which is a brand new office development in the heart of Birmingham. The building will see around 3,600 public servants from several government departments move there from 2020, including from HMRC and Department for Work and Pensions (DWP). The hub will be the base for one of HMRC’s regional centres. DWP plans to move staff into the hub from existing offices in the city.

The move is part of the Government Hubs Programme, which will reduce the number of isolated and under-used offices that the government has by co-locating departments in shared buildings across the UK. Departments moving to hubs will need less space as they adopt smart working principles, which will reduce their operating costs. Providing modern, flexible office space will further deliver value for money by improving staff wellbeing and productivity.

As well as taxpayer savings, the programme will act as a catalyst for regional growth and ensure the delivery of the best quality service to the public.

3 Arena Central will be in the heart of Birmingham and only a few minutes’ walk from New Street Station and the Grand Central shopping centre. The development will benefit from the extension to the Midlands Metro tram, which will include a stop adjacent to the site on Centenary Square Arena Central is in Birmingham’s city centre Enterprise Zone and forms part of the the city’s vision for regeneration in the Big City Plan.

"This new lease is great news for Birmingham, a vibrant modern city with high-levels of skilled graduates and a proud tradition of providing high-quality public sector services as well as a flourishing manufacturing sector. The new government hub in the city centre will not just be a catalyst for regeneration, but it will also mean that the civil servants working within it are equipped to deliver the best quality service to the taxpayer."

"We’re delighted to be part of the new UK Government Hub in 3 Arena Central, Birmingham. This is another step in HMRC’s transformation into a modern digitally advanced tax authority. It’s the beginning of a process that will see our colleagues come together in state-of-the art facilities, enabling closer working relationships and increasing our effectiveness in collecting taxes. It will also make HMRC an important contributor to the economy and to communities in and around Birmingham."

"Birmingham has an important role to play in our services for a range of benefits.

"Moving to the new hub will provide a more efficient working environment than our current offices in the city, giving us greater flexibility to meet changing customer and business needs."