We undertook a review of the fixed rate of guaranteed minimum pension revaluation for early leavers. The work was commissioned as part of a government consultation 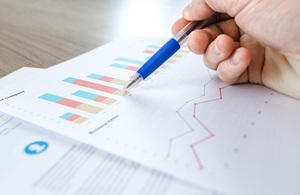 The Department for Work and Pensions (DWP) had asked GAD to undertake the review. It was for early leavers in contracted-out employment before 6 April 2016 and who leave service on or between 6 April 2022 and 5 April 2027.

As a result of GAD’s analysis, we proposed a fixed revaluation rate of between 3% per year and 3.5% per year would be an appropriate range. This conclusion was based on current trends and expectations in inflation and wage growth, with 3.25% deemed a reasonable assumption.

One of the authors of GAD’s report was actuary Hayley Spencer: “While GMP is a technical pensions subject, the fixed revaluation rate assumption does directly impact the level of individual pension payments.

“In our analysis we considered the consumer prices index and any upcoming gaps between inflation and earnings.”

Following the GAD review, the DWP launched a consultation which ran from 23 September 2021 to 18 November 2021. It asked stakeholders on the new fixed rate percentage and GAD’s report was included as an annex to the consultation.

The consultation response to the GMP revaluation was published on 21 February 2022. The consultation received 2 responses, one from the Pensions Administration Standards Association and the other from an individual.

The government has said the small number of responses suggests the industry is largely content with the proposed rate.

DWP has now confirmed the fixed rate of revaluation of GMPs. It will be 3.25% per year for early leavers in contracted-out employment before 6 April 2016 and who leave service on or between 6 April 2022 and 5 April 2027.

This is a decrease from the current rate of 3.5% a year. This percentage is provided for in legislation and is reviewed every 5 years by DWP.