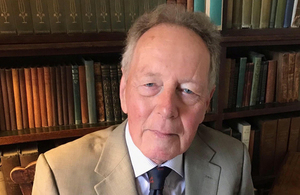 The announcement was made at the joint press conference at Siriraj Hospital, Bangkok, organised by the Prince Mahidol Award Foundation, Faculty of Medicine Siriraj Hospital, and the Thai Ministry of Foreign Affairs. This year there were 66 nominations from 35 countries. The Award Presentation Ceremony will be at the Royal Palace in January 2020.

Professor Mabey has studied trachoma for more than 30 years. It is the most common cause of infectious blindness worldwide. The research of Professor Mabey prompted the World Health Organization (WHO) to establish a global eradication program using SAFE strategy - (S) control through surgery, (A) mass treatment with antibiotics, (F) face washing, and (E) environmental and sanitation improvements. As a result of his work, more than 700 million doses of azithromycin were provided to people in 40 countries between 1999 – 2017 to prevent trachoma. So far, 13 countries have reportedly achieved the eradication of trachoma as a result. The WHO projections suggest that trachoma will be eradicated as a public health problem and cause of blindness in all countries by 2025.

Professor Mabey has published his research, more than 200 articles, in renowned journals. He was a recipient of many awards in the area of tropical health and received the honour Commander of the British Empire (CBE) in 2014 from Her Majesty Queen Elizabeth II for services to health development in Asia and Africa.

Professor Mabey is the 14th British scientist to receive the Prince Mahidol Award. The first British Prince Mahidol Laureate was Sir William Richard Shaboe Doll who received the award in the field of Public Health in 1992 and was known for determining the link between cigarette smoking and lung cancer. Sir Gregory Paul Winter, British biochemist who received the award in 2016, later received the Nobel Prize in Chemistry in 2018 for his work in the field of antibody engineering and modification technology.

This award comes as the UK and Thailand continue to deepen our collaboration in the field of health. In medical research we already have a range of partnerships including the Mahidol-Oxford Tropical Medicine Research Unit and the establishment of the office of the London School of Hygiene and Tropical Medicine at the Faculty of Tropical Medicine, Mahidol University. A range of partnerships are also supported through the Newton UK-Thailand Research and Innovation Partnership Fund. We are keen to develop further collaborations with Thailand, including the field of health education and policy. Through partnerships such as these, UK and Thai researchers are working together to find new solutions to development challenges.