Highways England has today unveiled the details of plans for £27.4 billion investment in the strategic road network across the country 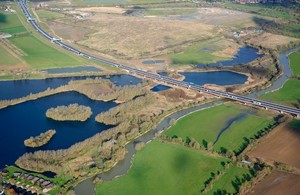 Aerial view of completed A14 Cambridge to Huntingdon.

Highways England will deliver £14 billion of projects improving the quality, capacity and safety of the motorways and major A roads that have helped keep the country going during the Covid-19 pandemic.

Almost £11 billion will go into improving every day journeys by repairing and replacing parts of the network, largely built in the 1960s and 70s.

In a boost to the nation’s recovery, Highways England said its plans would help support 64,000 construction industry jobs.

And it pointed to its recent opening of the £1.4 billion project on the A14 between Cambridge and Huntingdon, which was delivered eight months ahead of schedule and on budget.

"Our network is a vital part of everyone’s life. It has served the country well during the pandemic, keeping supermarket shelves stocked and enabling key workers to get where they need to be.

"Over the next five years we will increase capacity where it is most needed and continue to upgrade more of the network which has suffered from decades of under-investment.

"We now have a strong track record of delivering new schemes and operating the network for the benefit of our customers and the communities we serve. The plan we’re launching today will protect and create jobs to aid the nation’s recovery, and make journeys faster and more reliable for freight and road users."

Over the past five years Highways England has completed 36 major improvement schemes, including adding additional capacity on the M20 in Kent, the M6 in the Midlands and in Cheshire. Around 20 of the projects were opened ahead of schedule.

It has also completed 160 cycling improvements, reduced flooding at 260 locations, reduced noise at more than 1,170 locations and improved air quality at 101 locations, and its road improvements have helped unlock the building of 44,000 houses and the creation of 45,000 jobs.

Today’s plans set out how Highways England will deliver the Government’s second Road Investment Strategy announced at the Budget in March. The company will:

• open more than 50 upgrades and save millions of hours by improving journey times
• invest almost £1 billion on broader projects to improve roads for the communities they serve, such as conserving cultural heritage or strengthening flood resilience, and improving access for walkers, cyclists and horse riders
• make 7,500 households quieter by tackling noise from roads
• help stop the loss of biodiversity
• develop a pipeline of around 30 schemes for potential construction post 2025

It will take forward flagship projects to connect key parts of the country, including:

• a new road and tunnel under the Thames between Essex and Kent, adding capacity and speeding up journeys between the Channel ports and the rest of the country, which will improve access to jobs, housing, leisure and retail facilities on both sides of the river

• upgrading the A66, creating the first new Trans-Pennine dual carriageway since 1971, improving connections between ports in Scotland and Northern Ireland and those in England at Hull and Felixstowe

And it will deliver a series of major upgrades, such as improving: access to the Port of Liverpool; capacity on the A19 in Sunderland supporting local plans for an international advanced manufacturing park; journey times on the A38 with a scheme for the Derby junctions in the Midlands while providing extra facilities for walkers and cyclists; and the A12 in the East, aligning with local authority development plans.

As much of the network was built over 60 years ago and needs renewing the company will:

It is laying the foundations for connected vehicles, digital traffic management and enabling two-way communications between roadside infrastructure and in-car devices that will revolutionise inter-modal transportation and personal and commercial mobility.