New teachers ready to deliver in the classroom

As pupils return to school, a survey has revealed that 9 out of 10 new teachers are positive about how well their training has prepared them for the classroom 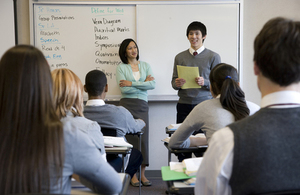 In the last academic year 23,100 newly qualified teachers joined the 450,000-strong teacher workforce and, in a survey published today (Wednesday 5 September), 91% of respondents say their training has equipped them to deliver high standards for pupils.

The findings published today follow plans to boost teacher development opportunities, including extra support during the early stages of their career. It also builds on the pledge from the Education Secretary, Damian Hinds, to champion the teaching profession and work with school leaders, teaching unions and Ofsted to reduce workload in schools.

Thanks to a hard-working and incredibly talented generation of teachers, alongside the government’s bold reforms, there are now 1.9 million more children in good or outstanding schools than in 2010.

"It has never been a better time to join the teaching profession. This survey demonstrates high levels of satisfaction with teacher training. Despite the challenges of recruiting graduates in a strong economy with fierce competition for graduates in other professions and industries, last year we recruited over 32,000 trainee teachers, up 3% from the previous year. We have recently announced a 3.5% pay rise for teachers in the early part of their careers, and there are ample opportunities for promotion."

Last year 32,710 trainee teachers were recruited – up by 815 (3%) on the previous year. This generation of teachers is better qualified than ever - 98.7% of all teachers have a degree or higher, which has risen by 4.4 percentage points since 2010, and nearly one in five trainees in 2018 has a first-class degree.

Today’s announcement comes after the Education Secretary confirmed an investment of £508 million to fund the deal which means the main pay range for classroom teachers will increase by 3.5 per cent – as part of the government’s biggest pay rise in almost 10 years for around one million public sector workers across Britain.

It also builds on plans to support the profession and put it on a par with other industries, including:

• the launch of a workload reduction toolkit and the appointment of a workload advisory group to strip away work that does not matter in the classroom; and

• a pledge to introduce more flexible working practices, including a £5 million fund to help experienced teachers take a sabbatical.