New bursary to get veterans into teaching

New government bursary of £40,000 available from September 2018 for ex-service personnel to retrain as teachers 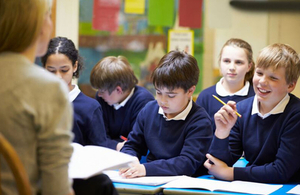 Pupils across the country are set to benefit from the leadership and world-renowned expertise of our armed forces – as the government unveils a £40,000 bursary for ex-service personnel to retrain as a teacher.

From September, courses at universities nationwide will offer the incentive to veterans who have left full-time employment in the British Army, Royal Air Force or Royal Navy in the last five years, or anyone leaving before training begins.

The incentive will help ex-servicemen and women – who have spent their career honing the discipline, motivation and unique skills needed to become great teachers – make the transition to the classroom where they can share their expertise with the next generation.

The bursary has been developed as part of the Department for Education’s commitment to the Armed Forces Covenant – the nation’s promise to those who serve or who have served – and will be offered on priority undergraduate courses in biology, chemistry, computing, maths or modern foreign languages.

"Academic standards are rising, with 1.9 million more children in good or outstanding schools and a record 15,500 more teachers than in 2010. We want this trend to continue and to explore every opportunity to attract the best and brightest into teaching.

"Our ex-servicemen and women – who have already contributed so much to our country – have a wealth of experience and expertise that can be shared in the classroom, teaching pupils the knowledge they need to succeed alongside vital skills, such as leadership and self-discipline."

"Our incredible troops have unrivalled life experiences and world-class skills that will motivate and inspire a generation of children in classrooms across the country.

"Through leadership, teamwork and problem solving, veterans are ideally suited for a career in teaching once they leave the Armed Forces.

"This programme not only offers our valued veterans a new and fulfilling career, it will help our children achieve their aspirations and life goals."

"This initiative, under the Armed Forces Covenant, is another great addition to our wider resettlement offer of courses, mentoring, and advice, helping our serving personnel successfully transition into civilian life."

The announcement, made today (6 March) by the Department for Education and Ministry of Defence, adds to a number of government bursaries and other financial incentives to encourage even more talented trainees into key subjects.

The new bursary will replace the existing Troops to Teachers Programme, providing veterans with greater flexibility and enabling them to train with any Initial Teacher Training provider, while still receiving the same level of financial support.

The University of Brighton, which has delivered the Troops to Teachers Programme since 2013, has backed the move and will now draw on the experience of training 106 service-leavers to become fully-qualified teachers – with a further 96 trainees currently studying to deploy their skills in the classroom.

"The University of Brighton is delighted that non-graduate, ex-service personnel will continue to be offered the opportunity to train to teach.

"They offer unique expertise and skills that are especially valued by the pupils they teach as well as the profession more broadly."

Among the University of Brighton’s trainees is Colin Grimes, a former Aerospace Systems Manager in the Royal Air Force who is now Year 4 teacher at Rothbury First School in Northumberland. He welcomed today’s news:

"Studying for a degree in education while being supported financially opened up exciting new career choices for me. Without this kind of support many candidates would not have access to career opportunities of this kind.

"So it’s great news that ex-military personnel will now be offered even more opportunities to train for a valuable and stimulating second career while still being able to support their families."

In addition to the bursary, trainees will also have access to further support through the government’s Get Into Teaching service and other financial incentives. Applications for 2018 courses are now open.

The bursary will be paid in the final two years of a three-year course. Bursary requirements - applicants must:

• must be an undergraduate i.e. not already have a degree;
• need to have left full time employment in the British Army, Royal Air Force or Royal Navy in the past 5 years;
• must be interested in studying and qualified to study the priority subjects of secondary maths, biology, chemistry, physics, computing or modern foreign languages;
• meet the appropriate initial teacher training (ITT) eligibility criteria. More here.

From 2019 the Troops to Teachers Programme will cease to exist and the University of Brighton will deliver a new undergraduate ITT programme that will be open to service-leavers.

The Armed Forces Covenant is a promise from the nation to those who serve or who have served, and their families, which says we will do all we can to ensure they are treated fairly and are not disadvantaged in their day-to-day lives. The Armed Forces Covenant relies on the people, communities, and businesses of the UK to actively support it in order to make a difference.

Today’s news adds to a growing number of initiatives to attract the brightest and best into the teaching profession, including:

• Increasing bursaries to £26,000 for all trainees with a 2:2 or higher in the highest priority subjects; physics, languages, chemistry, biology, computing, geography and classics.

• Offering a £20,000 bursary for maths trainees followed by two additional early-career payments of £5k each (£7,500 if teaching in local authority areas where teachers are most needed) in their third and fifth year of teaching, if they have taught in a state school in England since completing their teacher training course. More details here.

• Offering bursaries for English trainees have been increased to £15,000 for all trainees with a 2:2 or higher, and bursaries in all other subjects are unchanged for 2018 to 2019.