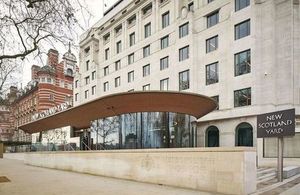 The winning building is a £58 million project that remodelled and extended the former Curtis Green building. It represents a move back to Victoria Embankment by the Metropolitan Police service, having first previously occupied the address in 1890.

• a modern, flexible and efficient office environment for the Metropolitan Police Service
• extended floor space that facilitates agile working and more interaction between staff
• innovative design including an elegant curved glass entrance pavilion to enable greater access for the public

It was funded from the sale of New Scotland Yard’s previous site at 10 Broadway, which was vacated in 2016 and acts as a central hub supported by nine local offices.

This award is supported by the Infrastructure and Projects Authority (IPA), part of the Cabinet Office, and the Department for Business, Energy and Industrial Strategy (BEIS). It was presented for the first time in 2001. It is one of many awards presented at the British Construction Industry Awards (BCIA), organised by New Civil Engineer Magazine, and held in association with Institution of Civil Engineers (ICE) and the Architects Journal.

"This award for Scotland Yard is testament to the government’s commitment to constructing public buildings which deliver value for money for the taxpayer and smarter public services.

"The building’s innovative design and use of technology helps the Met Police work in a more modern and efficient way. It was funded from the sale of its former building and acts as a central hub supported by nine local offices, putting police services more in touch with their local communities.

"The project shows what can be achieved when government and the private sector work together to deliver innovative and efficient construction, completed on time and on budget. It demonstrates all the principles set out in the Government Construction Strategy - our plan to improve productivity and deliver £1.7bn efficiencies in government construction by 2020."

"I am delighted that our new building has been commended. This building, in the heart of Westminster and close to the Met’s founding location, allows the Metropolitan Police Service to look forward to the future, providing excellent facilities and technology for our officers and staff.

"From our glass pavilion and Eternal Flame Memorial, to the iconic revolving New Scotland Yard sign, the design has incorporated the past, present and future of policing in London. Many congratulations to all the colleagues past and present who made this a reality."

"Here is a building that is both functional for day to day police work and yet also accessible and welcoming to the public. The design is stunning, complementing its surroundings and demonstrating a redevelopment that has been completed to the highest standard."