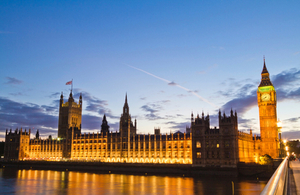 Efforts to protect the Palace of Westminster from a catastrophic event like the recent Notre Dame fire reach a major milestone today with the introduction of the Parliamentary Buildings (Restoration and Renewal) Bill.

The bill means the governance structure, approved by MPs and peers in 2018, will draw on the best practice of the 2012 London Olympics by establishing:

• a Sponsor Body - made up of parliamentary and external members, which acts as the client on behalf of Parliament and will oversee the delivery of the works

A number of financial safeguards are written into the bill, given it is imperative that Parliament keeps total costs down.

• an Estimates Commission, with cross-party involvement, will be established to scrutinise the Sponsor Body’s spending plans

The Rt Hon Andrea Leadsom MP, Leader of the House of Commons, said:

"Events like the terrible fire at Notre Dame bring home to us sharply the importance of preserving our historic buildings. The Palace of Westminster, recognised the world over as a symbol of democracy, must be restored for future generations.

"This bill ensures the vital work needed to protect its future will happen in the most efficient way - with the expertise we need, proper structures in place, and making sure we deliver the best possible value for taxpayers’ money. I have always championed the need for Parliament to get on with this vital work, and am proud to introduce this bill."

The Rt Hon Baroness Evans of Bowes Park, Leader of the House of Lords, said:

"This bill is an important step in the restoration and renewal of the Palace. It will establish a Sponsor Board, independent of Parliament, with the expertise to prepare the detailed business case for R&R and create the Delivery Authority to carry out the works. Both bodies will be subject to financial accountability and Parliamentary oversight. It is imperative that we make progress and protect the Palace of Westminster for future generations."

Interim measures, including 24/7 fire safety patrols, are already in place to protect the historic Palace and ensures it remains compliant with existing fire safety laws. The risks, however, are very great, of a catastrophic failure within the building, and so progress to carrying out the urgent mechanical and engineering work is vital.

At the same time, preparatory work has been undertaken by the shadow Sponsor Board, established in June 2018, including the development of plans for temporary chambers for use during the period of the works.

The bill will require the Sponsor Body to secure parliamentary approval for the design, cost and timing of the works. MPs and Peers will move out of the Palace in the mid-2020s.