History of MOD in space

As a modern-day government science centre, Dstl is closely linked with the UK Space Agency, and space agencies of our allies across the globe. 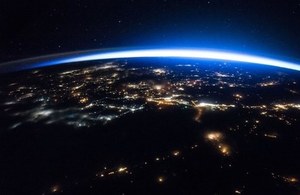 But as long ago as 1918, when the predecessor of Dstl (the Defence Science and Technology Laboratory), the Royal Aircraft Establishment (RAE), was based at Farnborough, and the space race hadn’t been thought of, the RAE – working for the Ministry of Defence (MOD) – was at the forefront of rocket science research and development.

Launchers and rockets from the Skylark and Black Arrow were launched into Low Earth Orbit (LEO) from as early as 1957, with increasingly heavy payloads. By 1962, satellite technology was at an experimental phase, looking into the effects of the atmosphere and the ionosphere on the newest satellite technology.

Early prototype materials like silicon solar cells and gas-jets were tested from the 1970s, and the Skynet satellite systems – which provided military communications support at home and overseas – began in 1969. The Skynet system was so successful that successive developments of the original were launched into LEO until 2012. Infrared telescopes and new solar panels, or cells, were brought from concept to use, and geolocation – which GPS systems used in applications such as satnav now rely on – was then developed.

When the Russians launched Sputnik 1 and then 2, the UK and its cold war allies were watching them, initially with an early radar system from RAF Lasham in Hampshire, which was processed at RAE Farnborough, by the Space Group, which is now part of Dstl.

The Dstl Space Programme began in 2014 and has just been relaunched with an injection of £50 million over the next 5 years. The programme will continue to build on the historic achievements by Dstl’s predecessors, working on further research into the space environment for the defence and security of the UK.