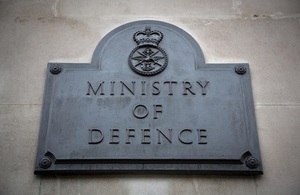 Her Majesty the Queen has approved the appointment of Major General James Swift as the next Chief of Defence People (CDP).

Since December 2018 Major General Swift has been General Officer Commanding of the British Army’s high-readiness warfighting division, the 3rd Division. He has previous experience as the Assistant Chief of the General Staff (ACGS) leading on corporate strategy. Prior to this he was the Ministry of Defence’s Head of Capability Strategy, for the 2015 Strategic Defence and Security Review.

"The Chief of Defence People is a vital role in Defence. In recent years we’ve made great progress to improve the working life of military and civilian personnel, and huge strides in our support for veterans and families.

"Major General Swift brings broad experience and a rich perspective to the job, I know he will continue the excellent work of the department for all Defence People."

As CDP, he will sit on the Ministry of Defence’s Executive Committee and set the strategy for developing a capable and motivated military and civilian workforce. Major General Swift will be responsible for all people in Defence, covering 200,000 servicemen and women, 60,000 civil servants. He will be developing a military offer that increases the recruitment and retention of service personnel and overseeing the transition from military to civilian life for service leavers.

In late February, he will be taking over from Lieutenant General Richard Nugee, who is moving on after almost four years in the role of CDP, to lead a review into the Department’s approach to climate change.

"Our people, civilians, service personnel, their families and veterans are the reason I continue to serve. They have always been the critical component of Defence capability and will continue to be in the 21st Century but we must transform to retain our edge.

"I look forward to working with my team, building on the great work of the department, to help make a difference for people across Defence."