Severn Crossing to be named The Prince of Wales Bridge 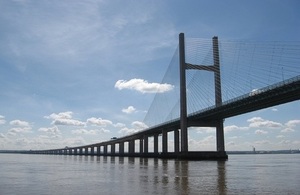 The Second Severn Crossing will be renamed The Prince of Wales Bridge at a special ceremony later this year, Secretary of State for Wales Alun Cairns announced today (5 April).

The renaming of the Second Severn Crossing, opened by Prince Charles in 1996, will mark The Prince of Wales’ 70th birthday year, and will also mark the 60th anniversary of The Queen ‘creating’ him The Prince of Wales at the closing ceremony of the British Empire and Commonwealth Games in Cardiff in 1958. The Prince was nine-years-old.

Now known as the Commonwealth Games, this year’s competition was officially opened by The Prince of Wales on behalf of The Queen on the Gold Coast, Australia earlier today.

The announcement was confirmed by the Secretary of State for Wales Alun Cairns who also confirmed that the renaming would be marked in a special ceremony attended by The Prince in Wales later this year.

"I’m delighted to announce that - with the agreement of the Prime Minister and Her Majesty The Queen - the Second Severn Crossing will be renamed the Prince of Wales Bridge.

"The announcement is a fitting tribute to His Royal Highness in a year that sees him mark 60 years as The Prince of Wales and decades of continued, dedicated service to our nation.

"Renaming one of the most iconic landmarks in Wales is a fitting way to formally recognise his commitment and dedication to Wales and the UK as the Prince of Wales.

"We look forward to marking the occasion at a special event later this year when the new Prince of Wales Bridge and its sister bridge will be seen as positive symbols of a newly invigorated economic and social partnership between south Wales and south west England, and the strength of the United Kingdom."

The announcement comes in the year that the tolls to use the Severn Crossings will be abolished by the UK Government.

"Lower charges on the Severn bridges have already saved drivers more than £3 million – helping boost the economy in Wales and the South West. This is a great way to usher in a new era for this iconic crossing.

"When the tolls are removed by the end of this year, more people will be able to take advantage of even more new job and business opportunities on both sides of the Prince of Wales bridge."

Tens of millions of motorists a year are set to benefit, saving them money and cutting journey times. Car drivers who use the crossing every day will save a minimum of £115 a month and businesses across the area will see a further benefit by seeing an end to the £16 charge for lorries. The south Wales economy alone is set to receive a boost of around £100 million a year.

Doing so will also drive the biggest economic stimulus Wales has seen in decades and create the most natural economic growth corridor spanning Cardiff through Newport to Bristol highlighted in the recently published Industrial Strategy.