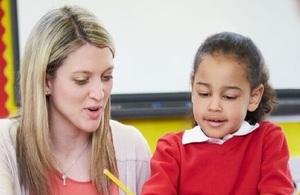 Education Secretary Damian Hinds has vowed to take action on exclusions once Edward Timpson’s review has concluded, saying he would not rule out legislation to ensure more accountability for schools that permanently exclude children and place them in alternative provision.

While the number of children excluded from school is lower than it was ten years ago, the Government launched an externally-led review by former Children’s Minister, Edward Timpson, in the spring to look at how exclusions are used and why certain groups are disproportionally affected.

The Government will respond to this review when it is published at the beginning of next year.

Speaking today (17 October), Mr Hinds was clear that schools will still reserve the right to exclude as a last resort, but where pupils are excluded, the quality of education they receive should be no different than in mainstream settings.

He also set out his vision for an inclusive education system and lead a discussion on how mainstream schools, alternative provision, and local authorities can better support these young people to fulfil their potential, regardless of the challenges they may face.

Ahead of the roundtable, Education Secretary Damian Hinds said:

“Permanently excluding a child from mainstream school should only ever be a last resort. We support teachers in making these difficult decisions where they are justified, as poor behaviour does have an impact on other children in the class.

”We have an ongoing externally-led review of school exclusions but I want to be clear that holding schools to account for the pupils they place in alternative provision and permanently exclude is not off the table.

“But being excluded should never be at the cost of a child’s education. No matter the obstacles they may face or the backgrounds they’re from, we want our young people to receive an education that fosters ambition and a confidence in their abilities.

“The harsh reality is that for parents and carers facing the prospect of their child being placed in alternative provision or permanently excluded, this can be a time of huge anxiety.

“We need to be just as ambitious for pupils in alternative provision as we are for those in mainstream schools – with high quality teaching and education, so parents can feel reassured and positive about their child’s future, despite the difficulties they may have faced.

“Alternative provision can offer a lifeline to these children and their parents, such as smaller classes and more tailored support from teachers, helping them to flourish.”

Mr Hinds’ roundtable meeting builds on the work he has already prioritised to support the most vulnerable children and young people in society and those who face additional challenges. This work includes the Department for Education review of outcomes for Children in Need, and the £4million alternative provision innovation fund awarded in August.

It comes as new research published today (17 October) finds that many alternative provision settings have features valued by pupils and their parents, such as small class sizes and good pastoral care.

However, the findings also suggest parents whose children enter alternative provision often feel anxious about the quality of their education, or embarrassed that their child has moved out of mainstream school.

The research also highlights that some councils, schools and alternative providers are developing effective commissioning and funding arrangements with mainstream schools to help them be more inclusive of children with additional needs.

To tackle this injustice, and to reassure parents and pupils alike that a high quality education is not optional, the Department for Education is raising the standard of alternative provision.

The Education Secretary has also responded to a report from the Education Select Committee on alternative provision and exclusions, highlighting the Government’s work underway to improve standards, including:

• Nine new projects through the £4 million Innovation Fund that help pupils back into mainstream education when it’s right for them, encourage parents and carers to be more involved in their child’s education, help young people make good academic progress and move on to further education or employment;

• A ‘roadmap’ setting out how to improve outcomes for children in alternative provision, so that every young person in the care of these settings gets a good education;

• New evidence about how schools are supporting children at risk of exclusion, and examples of good practice in alternative provision commissioning and funding; and

This builds on the Education Secretary’s commitment at the Association of Directors of Children’s Services (ADCS) in July, where he set out his expectations that schools be encouraged to support pupils facing additional challenges, including those at risk of exclusion. He also set out his determination that schools should be rewarded for working with these pupils, and encouraged to focus on all pupils – not just the highest achievers.