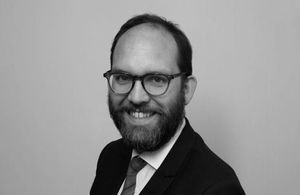 The Communities Secretary has today (19 December 2018) appointed a new member to the Homes England board.

Ceri Smith, who has been the Director of UK Government Investments since its creation in April 2016, will be the Department’s shareholder representative member.

Homes England will be continuing recruitment for further board members in 2019, aiming to ensure diversity at all levels.

Mr Smith has been appointed by the Communities Secretary Rt Hon James Brokenshire MP, in consultation with Homes England’s chairman.

"We are committed to delivering the homes our country needs and Homes England have an important role to play in helping us meet that goal.

"Ceri Smith is an important appointment to their Board, as they build their executive team to meet the challenges ahead."

"Ceri is joining the Homes England Board at an exciting time, as we expand as an organisation to change the housing market and deliver the government’s ambition of building 300,000 new homes each year.

"His wealth of experience working with business and government means he will be able to make a valuable contribution to the agency as we tackle the housing challenges facing the country."

"I’m pleased to accept my formal appointment to the Homes England Board and very much look forward to working with the team."

About the new board member

Ceri was part of the management team that created UK Government Investments in 2016. He led the creation of, and is a Non-Executive Director of, the British Business Bank, the UK’s first domestic economic development bank. He is also responsible for oversight of the Land Registry, Ordnance Survey and the Royal Mint.

Prior to joining UKGI he was a Director in the Department of Business, variously responsible for the UK’s employment law framework and for Industrial Strategy, and was Director of the Office of Life Sciences.

Before joining the Business Department in December 2007, Ceri was a senior official at HM Treasury where his responsibilities included developing the policy response to the collapse of Northern Rock; founding and leading the Treasury’s SME taxation team; developing the government’s Enterprise Capital Fund Programme; and leading on issues around the financing of terrorism and serious crime in September 2001.