The Defence Secretary has appointed Dr Rob Johnson to lead the new ‘Secretary of State's Office for Net Assessment and Challenge.’ 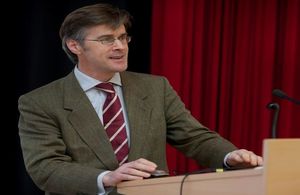 Using research, analysis and external think tanks, this new unit will become the main bulwark of critical thinking for the Ministry of Defence, ensuring that the UK’s Defensive capabilities are at peak performance.

The work of SONAC will include extensive wargaming and red teaming, informed by Defence Intelligence, to ensure strategies are tested by independent and diverse voices before they are implemented in the face of future strategic challenges. This will be undertaken by a team of around 25 people, but will also draw upon the expertise of larger virtual teams to deliver analysis and challenge projects.

The new unit will also incorporate the Directorate of Operational Capability (DOC). Established in 1995, the DOC exists to provide Ministers with rigorous and honest assessments of UK military combat power. Working directly to VCDS and reporting to the Minister of State for the Armed Forces, the DOC’s purpose is to ensure there is independent and impartial analysis of operational capability in Defence for Chiefs of Staff and Ministers.

Commenting on the new appointment, the Defence Secretary said:

"Dr Rob Johnson brings with him a wealth of experience from policy and academic fields. I look forward to working with him on numerous projects. Defence leaders must be open to scrutiny and constructive criticism if we are to avoid failure on the battlefield. We should never stop challenging ourselves in the pursuit of excellence."

Dr Rob Johnson, who is the Director of the Oxford Changing Character of War Centre, will lead the newly established Secretary of State’s Office for Net Assessment and Challenge (SONAC), responsible for the provision of independent advice to the Secretary of State and the Defence Board. This is part of the Defence Secretary’s plans for reform, laid out in the 2021 Integrated Review which reinforces the commitment to modernise Defence and to address next-generation threats across the globe.

Dr Johnson is also a Senior Research fellow at Pembroke College and advises and delivers direct support to government and armed forces in defence and security matters, including the United States, Europe and Australia.

"Net Assessment represents a step change for the UK in terms of long-term strategic planning. Its integral ‘challenge’ function ensures we remain true to our principles of accountability, efficiency and effectiveness. I am delighted to be joining the MOD team and driving forward the agenda that has been set."

SONAC will ensure the UK continues to deliver on commitments made in the Integrated Review and Defence Command Paper, challenging existing perspectives and better preparing Defence for the future.