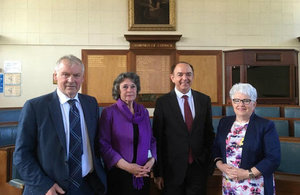 During his meeting, Lord Bourne praised the significant progress made in the region towards an ambitious economic vision for mid Wales. The new ‘inter-authority agreement’ will allow the councils to work together and pool resources, to produce a compelling proposal for key projects across both counties. Once the region agrees on those, discussions can begin on a formal ‘Heads of Terms Agreement’.

The UK Government is continuing to engage with leading mid Wales businesses, to encourage private sector support for the deal. Following on from his meeting with the council leaders, Lord Bourne visited DAVLEC Ltd and Northern Industrial Battery Services, both of whom are based in Powys. During the visits, Lord Bourne discussed barriers to growth in the region and encouraged them to assist in the development of the deal. He also outlined the necessity of the private sector in driving forward the UK Government’s vision for economic growth in mid Wales.

"The approval of the inter-authority agreement demonstrates a necessary step forward in the progress towards a transformative Mid Wales Growth Deal.

"It is encouraging to see that Council Leaders are coming together to look at the strengths and opportunities of the region’s economy, gaining significant momentum in the process.

"Empowering local areas to generate economic growth, create jobs and drive investment is vital in ensuring every part of the UK can prosper. The UK Government remains committed to supporting the deal and will continue to encourage private sector investment."