Fair funding for farmers across all parts of the UK

Independent panel will look at how funding supports the needs of England, Scotland, Wales and Northern Ireland 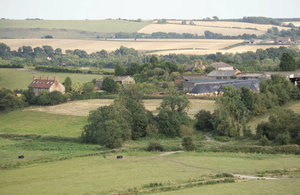 The Government has announced a review to deliver fair funding for farmers in all four parts of the UK when we leave the EU.

The Secretary of State announced today that an independent advisory panel will look at what factors should determine the distribution of agriculture funding between England, Scotland, Wales and Northern Ireland in this Parliament.

This will consider each country’s individual circumstances, including environmental, agricultural and socio-economic factors. Farm numbers and farm sizes will also be taken into account to make sure all parts of the UK are treated fairly.

The review, led by Lord Bew of Donegore, will provide recommendations for how the annual amount of convergence funding is fairly split between the four countries in the remainder of this Parliament once the UK has left the Common Agricultural Policy. It will be informed by previous allocations but will not revisit these decisions or redistribute money that has already been committed.

Lord Bew was Chair of the Committee on Standards in Public Life for five years and has contributed to a number of Bills, reviews and reports since his appointment as a non-party-political peer by the independent House of Lords Appointments Commission in February 2007. He will be joined by an experienced panel made up of representatives from each part of the UK. Lord Curry of Kirkhale, Jim Walker, Rebecca Williams and Leo O’Reilly have been appointed to the panel to represent England, Scotland, Wales and Northern Ireland respectively.

The government is also committing that it will not simply apply the Barnett formula to changes in Defra funding beyond this Parliament. This means that farmers in Wales, Scotland and Northern Ireland will not just be allocated funding according to the population size of each nation, which are in each case significantly smaller than England.

The Government has already confirmed that overall funding for UK farm support will be protected in cash terms to the end of the Parliament in 2022, providing more certainty than any other EU member state.

"This important review, led by Lord Bew, will explore how we can deliver funding for farmers that supports the individual needs of England, Scotland, Wales and Northern Ireland.

"We are committed to making sure that future funding is fairly allocated, and are also confirming that the Government won’t simply apply the Barnett formula to Defra’s funding beyond this parliament.

"Meanwhile our funding commitment up until the end of the Parliament gives more certainty for UK farmers than any other EU member state. Lord Bew said:"

“I’m very pleased to be chairing this review to explore an issue that is important to so many in the agriculture sector. I am anxious to consult widely and I look forward to getting started as soon as my fellow panel members have been appointed.”

"This review will establish fair funding arrangements for our vital Welsh farming industry. With the UK Government committing to do away with a Barnett model for agricultural funding, farmers in every part of Wales can look forward to greater future financial protection."

"The UK Government is committed to delivering fair funding for farmers and has already guaranteed the same cash total for farm support in all parts of the UK until 2022. This review is an opportunity to ensure the challenges Scotland’s unique landscape brings are fully recognised in future farm support allocations.

"Under the present arrangements, Scotland receives twice as much money for farming support than might be expected were the Barnett formula alone to be used. The commitment that future agriculture funding will not simply be Barnettised should be welcomed across the board.

"This reinforces our commitment to Scottish farmers and I urge the Scottish Government to stop keeping them in the dark about its plans for the future of agriculture in Scotland."

"The farming industry is one of Northern Ireland’s most significant employers, making a vital contribution to economic growth.

"We welcome this important review into ensuring a fair allocation of funding for farmers across Northern Ireland and the whole of the United Kingdom."

The review will conclude prior to the 2019 Spending Review with the aim of informing future funding decisions. The Terms of Reference can be read in full on gov.uk.

The panel will be engaging with the devolved administrations and stakeholders across the UK throughout the course of the review. If you wish to get in touch with the review secretariat, you can do so at intra-UK-allocations-review@defra.gov.uk