Grimsby, Thames Estuary, Plymouth, Wakefield and Worcester will receive millions of pounds of funding to invest in culture 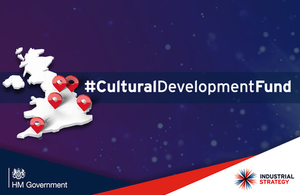 • Grimsby, Thames Estuary, Plymouth, Wakefield and Worcester will receive millions of pounds of funding to invest in culture
• Investment will support economic growth and create more than 1,300 new jobs across the country
• This funding forms part of the Creative Industries Sector Deal to help the country’s world-leading cultural and creative businesses thrive

In the first government investment of its kind, Grimsby, the Thames Estuary, Plymouth, Wakefield and Worcester will use the funding on local cultural plans which are tailored to the strengths and needs of each area.

It is expected that the funding will create over 1,300 new jobs, benefit 2,000 people through skills training, and support more than 700 businesses. Through match-funding, an additional £17.5 million will be invested across the five locations.

The Cultural Development Fund (CDF) has been launched by the Government to use investment in heritage, culture and creativity as a catalyst for regeneration. Each area has designed plans to strengthen the local arts sector, increase cultural access and provide greater opportunity for people to forge creative careers.

"Creativity, arts and heritage make our towns and cities unique and our communities better places to live.

"This is an incredible opportunity that will not only help people build careers in the arts and culture locally but also boost wider investment and diversify the creative economy."

The Culture Secretary will confirm the new funding as part of a major speech in Coventry today - the next UK City of Culture in 2021 - on the value of culture to the individual, communities and the nation as a whole.

The CDF, announced in the Creative Industries Sector Deal last year, marks a step change in how the Government is investing in culture. It aims to increase access to arts, heritage and the creative industries while also boosting the local economy by attracting more visitors to each area and supporting the growth of new businesses.

It forms part of the Government’s modern Industrial Strategy which has seen more than £150 million jointly invested by Government and industry through the creative industries sector deal to help cultural and creative businesses across Britain thrive and consolidate the country’s position as a global creative and cultural powerhouse.

The Fund was launched off the back of the success of Hull as UK City of Culture 2017. Hull provided further evidence of how targeted investment in culture can deliver a significant economic boost to an area, with over £3 billion of investment and more than 800 new jobs created in the city in the four years since it was awarded the title in 2013.

“At the Arts Council we believe that arts, culture and creativity have the power to transform people’s lives and the places where they live. It’s been a pleasure to work with DCMS to deliver the Cultural Development Fund, which makes significant investment across the arts, heritage and creative industries to bring about real change – and gives us the opportunity to demonstrate and quantify the impact that arts and culture have on economic growth and productivity in urban areas.”

"I welcome today’s announcement, which marks another important step in the implementation of the Sector Deal agreed between the Creative Industries Council and Government. These awards highlight the extent to which the creative industries are now a key part of local economies all over England and should enable them to grow further."