The Attorney General has appointed Andrew T. Cayley as Her Majesty's Chief Inspector of the Crown Prosecution Inspectorate (HMCPSI) 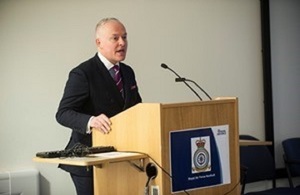 As part of the recruitment process, Mr. Cayley was subject to a pre-appointment hearing with the Justice Select Committee on Thursday 14 January. The committee recommended Mr. Cayley’s appointment. He is expected to take up post on 1 April 2021.

Andrew T. Cayley was the Director of Service Prosecutions from 2013 to 2020. He led the Service Prosecuting Authority through major reforms and the Service Justice Review. From 2009 to 2013 he was the United Nations Chief International Co-Prosecutor of the Extraordinary Chambers in the Courts of Cambodia, the Khmer Rouge Tribunal. Here he was responsible for prosecuting the leadership of the Khmer Rouge for the genocide, extermination and murder of up to two million of their citizens between 1975 and 1979.

From 1995 to 2007, he was Prosecuting Council and Senior Prosecuting Counsel at the International Criminal Tribunal for the former Yugoslavia (ICTY) and the International Criminal Court (ICC). At the ICTY he was co-counsel in a case that secured the court’s first conviction for genocide regarding events at Srebrenica in Bosnia-Herzegovina in July 1995; he also led for the prosecution in several other high-profile cases involving various aspects of the Yugoslav conflict. Also at the ICC, Mr Cayley led the investigation and pre-trial proceedings regarding allegations of genocide, crimes against humanity and war crimes committed since 1 July 2002 in Darfur, Republic of Sudan.

Mr Cayley first qualified as a Solicitor of the Senior Courts in 1989, transferring to the English and Welsh Bar in 2007. He is a Governing Bencher of the Honourable Society of the Inner Temple. He was appointed Companion of the Order of Saint Michael and Saint George for services to human rights and international criminal law in 2014, and appointed Queens Counsel in 2012.

"I’m pleased to announce Mr Cayley as Chief Inspector. His role is crucial to driving improvements across the justice system especially for victims. I’m confident that Andrew’s extensive prosecutorial and leadership experience will stand him in good stead to successfully lead the Inspectorate. I look forward to working with him during his tenure."

"I am honoured that the Attorney General has appointed me as Chief Inspector, a role that is so vital to improving the criminal justice system and reinforcing public trust in it. I look forward to leading the team in delivering a comprehensive and high-quality inspection programme."

Mr Cayley has been appointed following a fair and open assessment process conducted in accordance with the Governance Code on Public Appointments. He donated £10,000 to the Conservative Party in 2019.

Role of HM Chief Inspector of the Crown Prosecution Service