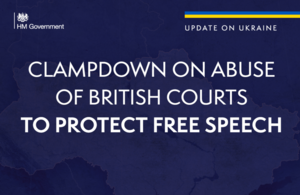 The Deputy Prime Minister Dominic Raab will today set out proposals that take aim at so-called Strategic Lawsuits Against Public Participation (SLAPPs). These range from strengthening legislation to introducing new court checks to curb this type of activity.

These lawsuits typically involve wealthy people or large businesses using the threat of endless legal action and associated costs to pressure their opponents under defamation and privacy laws. This tactic is increasingly being used to intimidate journalists, authors and campaigners to stifle legitimate criticism and prevent the publication of critical stories and books.

The government is now seeking views on a range of proposals which will be introduced as soon as possible. These could include amending the Defamation Act 2013 to strengthen the ‘public interest defence’ which protects people who publish private information from being sued if it was done for the public good.

Ministers are also considering capping the costs that claimants can recover with the aim of stopping the super-rich, such as Russian oligarchs, from ‘weaponising’ the high cost of litigation to stifle free speech. Changes could also introduce a specific requirement for claimants to prove ‘Actual Malice’ by a defendant in libel cases in order to deter spurious claims.

"The ability of a free press to hold the powerful to account is fundamental to our democracy and as a former journalist I am determined we must never allow criticism to be silenced. For the oligarchs and super-rich who can afford these sky-high costs the threat of legal action has become a new kind of lawfare. We must put a stop to its chilling effect."

"The Government will not tolerate Russian oligarchs and other corrupt elites abusing British courts to muzzle those who shine a light on their wrongdoing.

"We’re taking action to put an end to this bullying and protect our free press."

Other measures would enable courts to throw out claims using these tactics earlier in proceedings and impose Civil Restraint Orders to prevent people from bringing repeated legal challenges.

Meanwhile, the Solicitors Regulation Authority has already issued new guidance on conduct in disputes, identifying SLAPPs as an example of ‘pursuing litigation for improper purposes’ and reminding solicitors of their duty to report misconduct.

These moves come as the High Court this month dismissed a libel claim against the British journalist, Tom Burgis, brought by a Kazakh-owned mining firm for his book ‘Kleptopia: How Dirty Money is Conquering the world’, but often the purpose of SLAPPs is to suppress publications without a case ever coming to court and being reported. As a result, Ministers will be assessing the evidence to understand how widespread the problem is before deciding the best course of action.

"The NUJ warmly welcomes the commitment by the government to tackle the scourge that is the deployment of SLAPPs and other forms of lawfare cynically designed to stymie journalistic investigations and reporting by the rich and thin-skinned.

"We have long campaigned for low-cost arbitration solutions to settle genuine disputes and would welcome any moves to level the playing field and ensure journalists and media outlets no longer have to face prohibitive costs and deliberate intimidation by wealthy litigants with the deepest of pockets. For too long the super-rich have got away with abusing the law to bully journalists and undermine media freedom.

"The NUJ will consider the detail of these plans, and looks forward to participating in the government’s consultation on its package of measures."

Dawn Alford, Executive Director of the Society of Editors said:

"At a time when the vital role of journalists in holding power to account and exposing wrong-doing and corruption have never been more important, the Society welcomes the Government’s consultation on measures to tackle the use of SLAPPs.

"Deployed by powerful individuals and companies in an effort to silence and intimidate critics and deter legitimate public interest journalism, SLAPPs not only have a chilling effect on the public’s right to know but they pose a grave threat to media freedom. It is essential that laws are strengthened and practical deterrents are put in place to ensure that journalists – as well as campaigners, academics and authors – are able to fulfil their role in keeping the public informed without fear of intimidation or harassment."

Today’s announcement follows the recently passed Economic Crime (Transparency and Enforcement) Act which includes strengthened powers to crack down on corrupt elites and ramp up pressure on Putin’s regime. The Deputy Prime Minister visited the International Criminal Court (ICC) in The Hague this week to offer extra practical support from the UK to help prosecute Russian war crimes.