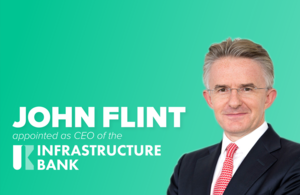 The Chancellor Rishi Sunak has put John Flint, former CEO of HSBC, at the helm. He will be tasked with leading the UKIB to accelerate investment into ambitious infrastructure projects that cut emissions and help level up every part of the UK.

Born in Yorkshire, Mr Flint is committed to UKIB’s levelling up agenda, and will be based at the institution’s headquarters in Leeds. He most recently held the role of Group Chief Executive of HSBC, a company where he spent 30 years. He first joined as a graduate trainee in 1989 before holding various senior leadership positions across the business including as Chief Executive of Global Asset Management, Group Treasurer and Deputy Head of Global Markets.

First announced by the Chancellor alongside the Spending Review, the UKIB will help finance important projects in every region and nation of the UK in sectors including clean energy, transport, digital, water and waste.

The UKIB will receive an initial £12 billion of capital and will be able to issue a further £10 billion of government guarantees, helping to unlock more than £40 billion of investment overall.

The Chancellor of the Exchequer Rishi Sunak said:

"I am delighted to appoint John Flint as the first permanent CEO of the UK Infrastructure Bank. This is an important milestone for the Bank in its efforts to tackle climate change and level up, while creating new opportunities across the UK as part of our Plan for Jobs . Mr Flint brings outstanding financial and management expertise which will be crucial to leading the organisation as it grows its operations and starts to deliver on its mission to finance projects in every region of the UK."

"The CEO will play a pivotal role in shaping the organisation’s culture, taking charge of UKIB’s development and performance, and leading its talented workforce. John Flint has an outstanding track record and deep experience within both finance and senior leadership positions; I look forward to working with him closely in his new position.

"I would also like to offer my personal thanks to John Mahon, who has served as interim CEO with considerable skill, for his many contributions to the Bank – steering UKIB through a crucial development period."

"I am honoured to be appointed the first permanent CEO of the UK Infrastructure Bank.

"This is a unique leadership opportunity. The UK Infrastructure Bank’s purpose is clear, and the opportunity to play a role in accelerating the UK’s transition to a low carbon economy, and catalysing regional economic growth is exciting.

"I look forward to getting started on the new adventure, meeting my new colleagues, and building an outstanding team."

Mr Flint was appointed following a fair and open competition and will lead the executive functions of UKIB and, as CEO, sit on the institution’s board. He will formally begin his role on 27 September.