Anyone working in the UK public sector can now receive free access to more than a thousand high-resolution satellite images of Britain, the UK Space Agency announced today (21 March 2019) 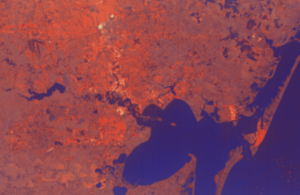 The archive of images and radar data for research and development projects is available to Government departments, emergency services and local authorities as well as industry and academia if their work meets a public sector need.

In the first trial of its kind the data, which has been made available by the UK Space Agency’s Space for Smarter Government Programme (SSGP), is intended to benefit the public sector in areas such as planning and development and environmental monitoring, while boosting further growth in the UK’s world-leading space industry, which already employs nearly 42,000 people.

The images provide an unprecedented level of detail of major British cities, transport networks, national parks and energy infrastructure. As well as increasing familiarity and raising awareness within the public sector of what space data can do, this will break down barriers to start ups and small businesses entering the sector, and create opportunities for new collaborations with public sector bodies.

"The demand for this data is huge and we have already had more than 40 organisations pre-registering an interest.

"We are doing something new, which tries to break down barriers to innovation, and I can’t wait to see what ideas and projects arise. This data could open new doors for SMEs, enable rapid prototyping within government and stimulate the next wave of satellite enabled application development."

After the award of two data contracts to Airbus, Defence and Space and Telespazio Vega UK Ltd in October 2018, commercial archives of images and radar data have now been downloaded to a satellite data storage system (known as CEMS) run out of the Satellite Applications Catapult at the Harwell Campus in Oxfordshire.

The archive data will be available for up to three years to explore what role high resolution satellite data could have in public sector delivery.

Providing the public sector with this satellite data is an example of the government fully exploiting the power of technology and data to deliver world-class services. The #SmarterGov campaign has been launched to drive innovation, savings and public service improvement across the public sector.