Special chicken boxes warning young people about the dangers of carrying a knife are being introduced in chicken shops across Britain, the policing minister has announced today 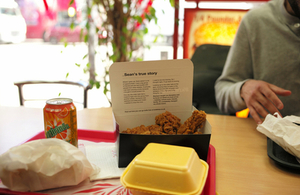 More than 321,000 chicken boxes that feature the Home Office #knifefree campaign have been distributed to over 210 outlets in England and Wales.

The insides of the boxes are printed with real life stories of young people who have chosen to pursue positive activities, such as boxing or music, instead of carrying a knife.

The boxes will replace the standard packaging in both independent and branch owned chicken shops, including Morley’s, Chicken Cottage and Dixy Chicken. Many of the participating shops will also have screens showing the #knifefree campaign.

"These chicken boxes will bring home to thousands of young people the tragic consequences of carrying a knife and challenge the idea that it makes you safer.

"The government is doing everything it can to tackle the senseless violence that is traumatising communities and claiming too many young lives, including bolstering the police’s ranks with 20,000 new police officers on our streets."

In addition, new #knifefree street teams will be visiting convenience stores, hair salons and barber shops as well as places of worship and community centres across London, Manchester and Birmingham. The street teams are made up of people who are trained to speak to local communities about the campaign and on the risks of carrying a knife.

"Morley’s are proud to support the #knifefree campaign. We have been saddened by the recent increase in knife crime. We want to promote being knife free by using custom chicken boxes to deliver the message and start conversations amongst all of our customers."

knifefree adverts have also been running at music festivals over the summer, including Wireless and Lovebox, and will be running at Notting Hill Carnival.

The #knifefree campaign aims to reduce knife crime by changing the attitudes and behaviours of young people aged between 10 – 21, highlighting positive alternatives to carrying a knife and challenging the perception that knife carrying is widespread and makes you safer.

It seeks to empower young people with the belief that there is a way out of knife crime, by using real-life stories of young people who made the decision to stop carrying knives and focus on positive alternative activities, such as basketball or acting.

The #knifefree chicken boxes follow a series of Government announcements to tackle serious violence, including the recruitment of 20,000 new police officers and confirmation that all 43 police forces in England and Wales can use enhanced stop and search powers.

On Monday (12 August) £35 million was confirmed for 18 Violence Reduction Units, which will tackle violent crime on a local level through a multi-agency approach.

The Prime Minister also hosted a roundtable at Downing Street, bringing together the police, probation and prison leaders to discuss how to cut crime and improve the criminal justice system.

He also announced up to £2.5 billion for 10,000 prison places; a review of sentencing for the most dangerous offenders; and a £100 million in prison security.