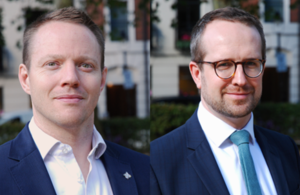 Joel Bamford and Colin Raftery have been appointed to the roles as part of the Competition and Markets Authority’s (CMA) preparation for the UK exiting the EU, when it is expected there will be a significant increase in the number and complexity of the merger inquiries it will conduct.

As well as strengthening its senior management team, the CMA will also be recruiting a number of extra personnel to work on mergers cases.

The appointments of Joel and Colin, both previously directors of mergers at the CMA, follow an open recruitment process that attracted applications from a strong field of candidates.

Together with Andrea Gomes da Silva, Executive Director for Markets and Mergers, Joel and Colin will take decisions in the more complex Phase 1 merger cases. In addition, they will oversee the merger group’s work across both the phase 1 and 2 portfolios, leading the CMA’s multi-disciplinary teams investigating mergers across a wide range of sectors.

They take up their appointments on 1 September 2018 and will report to Andrea Gomes da Silva.