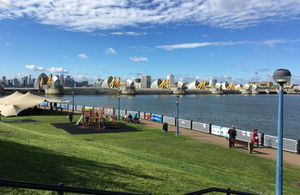 The Thames Barrier seen from the bank

Launching a major, long-term strategy to tackle flooding and coastal change, Environment Agency Chair, Emma Howard Boyd has said ‘we cannot win a war against water’ by building higher flood defences and called for a new approach to ensure communities are resilient to the threat of flooding posed by climate change.

Opening an 8-week consultation on the new strategy, Emma Howard Boyd said that the Environment Agency is preparing for a potential 4°C rise in global temperature and urgent action is needed to tackle more frequent, intense flooding and sea level rise.

Among the recommendations in the strategy, the Environment Agency has committed to working with partners to develop consistent standards for flood and coastal resilience across the country. To achieve these standards, communities should have access to a range of tools which give them control of how they prepare for and respond to flooding and coastal change, based on the challenges or flood risk that particular location may face.

These could include traditional defences, temporary barriers, natural flood management, sustainable drainage systems, effective flood warnings and emergency response, alongside designing and adapting existing properties and new development so they can recover quickly from a flood.

"The coastline has never stayed in the same place and there have always been floods, but climate change is increasing and accelerating these threats.

"We can’t win a war against water by building away climate change with infinitely high flood defences. We need to develop consistent standards for flood and coastal resilience in England that help communities better understand their risk and give them more control about how to adapt and respond."

Currently, two thirds of properties in England are served by infrastructure in areas at risk of flooding and for every person who suffers flooding, around 16 more are affected by loss of services such as power, transport and telecommunications.

The strategy calls for all infrastructure to be flood resilient by 2050 and the Environment Agency has committed to working with risk management authorities and infrastructure providers to achieve this.

In addition to resilience measures, an average of £1 billion will need to be invested each year in traditional flood and coastal defences and natural flood management. The National Audit Office has previously reported that for every £1 spent on protecting communities, around £9 in property damages and wider impacts is avoided.

As well as taking precautions to prepare for flooding and prevent damage, the strategy calls for more to be done to encourage property owners to ‘build back better’ after a flood. This could involve home improvements to make them more resilient, such as raised electrics, hard flooring and flood doors. The Environment Agency will work with government, insurers and financial institutions to review how to bring about this change by 2025.

Over 5 million people in England are at risk from flooding and coastal erosion. Yet only a third of people who live in areas at risk of flooding believe their property is at risk. The strategy pledges to build a nation of ‘climate champions’ working with the school curriculum to educate young people about the risk and continuing to develop accessible digital tools to communicate flooding.

• As properties built in the flood plain are likely to double over the next 50 years due to population growth and climate change, between now and 2030 all new development must be resilient to flooding and coastal change.

• All new development must not only be resilient to flooding but should also contribute to an environmental net gain.

• Government, the Environment Agency and risk management authorities need to be agile to the latest climate science, growth projections, investment opportunities and other changes to our local environment.

• In some cases, the scale of flooding or coastal change may be so significant the concept of ‘build back better’ may not be appropriate. This may mean potentially moving communities out of harm’s way in the longer term.

The Flood and Coastal Risk Management Strategy consultation is due to run from 9 May 2019 for 8 weeks up until 4 July 2019. Once the consultation has closed, the Environment Agency will review the responses and publish a final document which will then be laid before Parliament in winter 2019.

This strategy forms part of the government’s commitments set out in the 25 Year Environment plan to improve the environment within a generation, leaving it in a better state than we found it. Stakeholder reaction

Lord Deben, Chairman of the Committee on Climate Change, said:

"Everyone can see climate change accelerating. The UK urgently needs to stay ahead of worsening impacts by adapting. The Environment Agency is doing just that by setting out their flood strategy but we won’t be able to keep up with the pace of change if we don’t reduce emissions to zero. The Committee on Climate Change’s net zero report shows how to do that."

"Climate change is a real and growing threat to our way of life and nowhere is this felt more keenly than those parts of the country facing an increased risk of flooding. So we welcome the Agency’s approach and their endorsement of our call for a national standard for flood resilience.

"In many cases, we won’t be able to stop flooding and coastal erosion. But that doesn’t mean we should just accept it. We must ensure that communities are resilient and as our Assessment showed, this is affordable and achievable.

"It’s essential that the government’s National Infrastructure Strategy, published this autumn as part of the Spending Review, adopts our recommendation and backs this up with a robust and effective plan for funding and delivery."