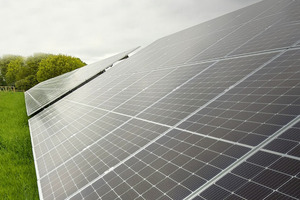 • first prison to be fitted with 18 more to follow this year
• offenders trained up in new skills to secure jobs on release – reducing reoffending and keeping the public safe
• the overall programme will save prisons up to £800,000 a year and generate 20 percent of each prison’s electricity

Hundreds of solar panels at HMP Wayland, Norfolk, are leading the way in slashing carbon emissions and electricity costs across the prison estate in a move that’s good for both the planet and the taxpayer.

The jail is the first in England and Wales to be fitted with ground mounted panels as part of the government’s ambitious drive to make prisons greener.

HMP Wayland is projected to save the equivalent annual CO2 emissions of 16 average UK homes while reducing its energy costs by £52,000 per year.

"I am delighted to see HMP Wayland become the first prison to reap the benefits of solar panels as part of our ambition to make significant savings for both the environment and the public purse.

"The initiative is part of the wider government action to build back greener, with more than £4 billion to construct sustainable prisons, and help achieve our commitment to reach net zero by 2050."

Today’s (21 January 2022) news is part of an unprecedented rollout of green technology across the estate. In August, the government announced plans to install 16,000 solar panels at 19 prisons across England this year – cutting more than 1,300 tonnes of carbon from the atmosphere and providing 20 per cent of each prison’s electricity.

The rollout of the solar panels scheme reinforces the department’s commitment to make prisoners greener. The four new prisons this government is building, will also operate as zero-carbon in the future, with an all-electric design, solar panels, heat pumps and more efficient lighting systems to reduce energy demand significantly.

From:
Ministry of Justice
Her Majesty’s Prison and Probation Service
Victoria Atkins MP