REMA is a major review into Britain’s electricity market design, set to ensure cost benefits of cheaper energy trickle down to consumers in the long term 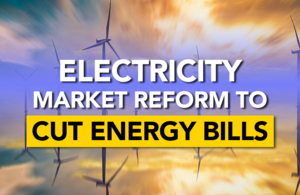 The UK’s exposure to volatile global gas markets and energy costs for consumers could be radically reduced in the long term, thanks to a transformational review into Britain’s electricity market design, launched today (Monday 18 July) by the UK government.

The Review of Electricity Market Arrangements (REMA) will seek views on a wide range of options to address the combined challenges of responding to higher global energy costs, the need to further boost energy security and move the UK to a cleaner energy system.

Some of the changes being consulted on include:

Under the current system, gas prices often end up setting the wholesale electricity price, because it is often the last source of supply to meet demand. The ever-increasing participation of renewables in the system means over time, cheaper electricity produced by renewables energy will determine the price more often. This consultation will explore ways of updating this pricing system to further reflect the rise in cheaper renewable electricity - something that could have a direct impact on reducing energy costs, ensuring consumers reap the full benefits of the UK’s world-leading and abundant supply of cheaper, cleaner energy.

"We’ve just seen the price of offshore UK wind power fall to an all-time low and gas is a shrinking portion of our electricity generating mix, so we need to explore ways of ensuring the electricity market is adapting to the times.

"That includes ensuring the cost benefits of our increasing supply of cheaper energy trickle down to consumers, but also that our system is fit for the future – especially with electricity demand set to double by 2035.

"In what could be the biggest electricity market shake up in decades, I am confident that this review will significantly enhance GB’s energy security and supply for generations to come."

Today’s consultation launch forms part of the government’s comprehensive review of the electricity market, first announced in the British Energy Security Strategy (BESS). The BESS significantly raised ambitions for building low carbon and cheaper-to-run technologies such as offshore wind, solar and nuclear, as part of UK plans to deliver a clean and secure electricity system by 2035.

The UK is already making huge progress in accelerating the delivery of cheaper, home-grown renewable energy. Earlier this month, the UK secured a record capacity of almost 11GW of clean energy at record low prices, through the government’s flagship renewables scheme - almost double the capacity achieved in the previous round, and enough to power around 12 million British homes.

With electricity demand set to at least double over the next 13 years, REMA will focus on establishing a fit-for-purpose market design, identifying and implementing the reforms needed to GB electricity markets that work for businesses, industry, and households.

This includes consulting on both the continued evolution and expansion of existing schemes, such as the Capacity Market and Contracts for Difference, and the introduction of more fundamental change where needed to guarantee uninterrupted supply during periods of no wind or sun at the lowest cost possible for consumers.

"Today’s launch of REMA is a major step in delivering a secure energy future for Britain, putting in place the electricity market design we need to allow us to make the most of our world-leading diversity of power sources while offering more value for money for consumers."

"We welcome the breadth and depth of BEIS’ Review of Electricity Market Arrangements. Wholesale markets need reforming to meet net zero and deliver better outcomes for consumers across Britain. REMA is the right forum for stakeholders to align on what is needed."

"Protecting consumers is our top priority which is why we are supporting government to do this wide-ranging Review of Electricity Market Arrangements. A fair energy market that protects consumers’ interests will only work if we can make best use of Britain’s cheap, plentiful renewable resources and invest in ways that deliver a low-cost net zero power system using our home-grown energy.

"We now look forward to working closely with government and all participants on this timely review to ensure our energy market arrangements deliver in consumers’ interests and help to make bills better."

"The energy industry is ready to help create an affordable, clean power system that meets both our Net Zero and Energy Security targets. REMA will help to ensure that the energy market can channel private investment to deliver on the government’s ambitious targets for delivering clean, low-cost, domestically produced electricity.

"With the cost of energy reaching unprecedented levels, it’s right and timely that the government reviews how to provide the most efficient market arrangements to support decarbonisation - so that it reduces bills in the long term."

"The electricity system will go through a profound transformation over the next decade as we continue to expand our renewables capacity. It’s vital that we have a market which supports investments in new projects and infrastructure and allows consumers to get the full benefits of a low cost, low carbon system.

"This consultation is an important step forward in that process, and the industry will continue to work closely with government on building the clean energy system which the UK needs to reach net zero as fast as possible."