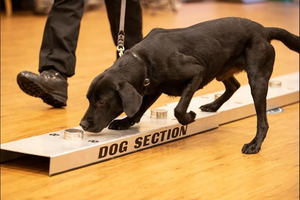 • £300,000 investment will see sniffer dogs trained to detect new compounds of Spice
• partnership between Ministry of Justice and Defence Science and Technology Laboratory will support scientists to create expanded detection programmes
• this is part of the government’s £100 million package to crack down on crime behind bars

In the last year alone over 100 kilograms of illegal drugs, including Spice, have been detected by drug dogs in England and Wales. But the efforts of some suppliers to outwit detection by changing the chemical make-up of Spice makes it difficult for dogs to find.

The new funding announced today will mean scientists can develop enhanced training courses which will help sniffer dogs in detecting new and adapted variants of Spice – keeping illegal drugs out of prison and reducing reoffending which costs the tax-payer £18bn a year.

"Spice drives violence, self-harm and crime behind bars so it’s crucial we prevent it getting into the hands of prisoners.

"That’s why we’re investing millions in technology, sniffer dogs and training to cut smuggling and ensure prisons are places where people can turn their backs on crime."

The partnership between the Ministry of Justice and the DTSL will see scientists analysing the psychoactive substance as it changes, to determine the most effective and safest way to train dogs to sniff out new blends of Spice.

The sniffer dogs will then undergo training in scent recognition followed by an operational assessment before they are placed into prisons.

"This partnership will significantly increase our dogs’ effectiveness in the fight against trafficking, substance misuse and violence in our prisons."

"DSTL is pleased to be joining this new partnership with the Ministry of Justice to tackle drug use in UK prisons, with a team of expert scientists supporting investigations. DSTL is also working more broadly with government to counter evolving drug threats."

The partnership and training are being funded by the government’s £2.75 billion commitment to transform the prison estate. This includes:

• £100 million to bolster prison security, clamping down on contraband such as drugs, weapons, and mobile phones that fuel violence, self-harm and crime behind bars.

• £156 million to tackle the most pressing maintenance issues to create safe and decent conditions for offender rehabilitation.