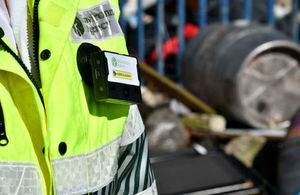 Body worn cameras to be used for enforcement purposes

Environment Agency enforcement teams in the East Midlands have adopted wearing body worn video cameras in their fight against crime following a successful six-month trial of the practice in the North-East.

The trial in the North-East found that wearing the cameras helped to reduce incidents of anti-social behaviour, assaults and threats against Environment Agency staff.

Footage captured on a bodycam in the North-East was recently used by the Environment Agency for the first time to convict an offender. The defendant pleaded ‘guilty’ of wilfully obstructing the officers in the execution of their duty and using abusive behaviour towards two officers when he knew they had video evidence.

"The safety of our staff is paramount. They are well trained in dealing with hostile situations and we take any threat against them very seriously. Our preference is to prevent hostility in the first place and wearing the cameras can prevent threatening situations from escalating.

"We want to get on with our jobs without the threat of violence and the cameras will help to protect staff and bring obstructive individuals to justice. Officers will switch on the cameras if and when they enter a hostile situation or where hostility may be anticipated. That could be a site where they have experienced aggressive behaviour in the past or an unknown quantity, such as on a remote river bank."

Studies also show that people are less likely to contest the evidence when they know their offence is captured on camera, which could help speed up justice and reduce legal costs.

Anyone with information about illegal fishing activities or to report illegal waste activity, should contact the Environment Agency’s 24/7 Incident Hotline on 0800 80 70 60 or anonymously to Crimestoppers on 0800 555 111.