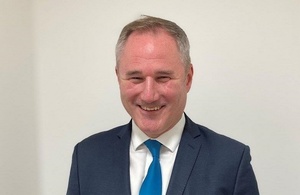 The Treasury Solicitor, Susanna McGibbon, has today announced that Douglas Wilson OBE has been appointed as the next Director General of the Attorney General’s Office (AGO).

Douglas Wilson was appointed after a rigorous and open competition, overseen by a Civil Service Commissioner.

Doug’s legal career has taken him to the UK’s embassy in Baghdad, the UN in New York and, closer to home, the AGO’s EU and International Law team where he led on some of the office’s most sensitive and complex work. Doug joins the AGO from GCHQ where he was central to the UK’s work to embed a new, more transparent, human rights and operational framework and foster the rule of law in cyberspace.

Commenting on the appointment, Susanna McGibbon, the Treasury Solicitor, said:

"Douglas Wilson is an inspiring leader, lawyer and public servant. I have no doubt he will be an excellent Director General of the AGO and astute adviser to the Law Officers.

"I look forward to working with Doug as we support the Government to deliver on its priorities and make law and politics work together for the benefit of our country."

Commenting on his appointment, Doug said:

"I am honoured to be returning to the Attorney General’s Office as Director General. Making law and politics work together at the heart of government, the AGO is an organisation with a reputation for excellence and integrity. I look forward to working with the Law Officers, Susanna and the many talented public servants in AGO and across the GLD and wider profession to serve the government, the country and the rule of law.

"As a mentor and exemplar to me and many others, I wanted to extend personal thanks to Dame Rowena Collins-Rice for her public service and stewardship of AGO. I also wanted to thank and congratulate Shehzad Charania MBE for his sterling work in leading AGO through the transition."

Douglas Wilson is the Director General of the Attorney General’s Office, appointed in May 2021.

Previously, he spent four and a half year in cyber agency GCHQ as Director of Legal Affairs and International Relations, serving on the Board as part of the senior leadership. In 2020 he spent 7 months as Acting Director of General Strategy which involved oversight of GCHQ’s response to the Covid-19 pandemic, and of GCHQ’s pitch to the Integrated Review and Spending Review settlement.

Doug was previously Legal Director at the Foreign and Commonwealth Office and before that Head of International and European Law at the Attorney General’s Office. Doug spent nearly 4 years at the UK Mission to the United Nations in New York, first in a legal role and then in the UK’s Security Council Team. Doug was previously posted to the British Embassy in Baghdad as Legal Adviser and Head of the Human Rights and Justice Section, and has served in various home postings as an Assistant Legal Adviser in the Foreign and Commonwealth Office.

Doug did pupillage at 20 Essex Street Chambers and qualified as a barrister in London, having studied law at Glasgow, Copenhagen and Cambridge.