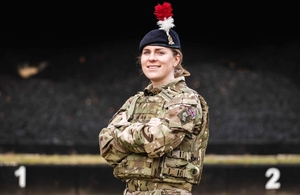 Announced on International Women’s Day, the body armour will be available to British military personnel from April 2022 and has been improved as part of Defence’s drive to modernise and better recognise the diverse needs of all personnel serving within our ranks.

The armour, known as the Virtus Scalable Tactical Vest (STV), has been adapted following extensive trials with serving female soldiers ensuring personnel have more tailored protective equipment and demonstrates Defence’s commitment to meet the needs of the growing number of servicewomen.

Originally designed for those in close combat roles, the STV was used predominantly by men. After the opening of all roles throughout the military to women, the new range of equipment is part of our efforts to continuously improve the design of our soldiers’ body armour, and to ensure it is fit for purpose, improves comfort and continues the modernisation of the UK military.

The updated protective equipment is the result of a collaboration between several Ministry of Defence and industry organisations including Defence Science and Technology Laboratory (Dstl), Defence Equipment and Support (DE&S) and Source Tactical Gear (Virtus manufacturer).

"I am very pleased that we are continuing to roll out a wider range of combat clothing and new sizes of the scalable tactical vest for our service personnel. Now that women are employed in all roles across the Army, it remains crucially important that all our equipment is designed to ensure we can operate efficiently and effectively in both training and on operations overseas."

"All roles within the military are open to women and we are committed to providing the best equipment to help them do their jobs.

"This is one of the many changes we have introduced to improve the experience for women in the Armed Forces and the new body armour and range of clothing sizes will increase the choice for our serving women."

"This new fit body armour has massive benefits to me and my fellow soldiers. The improved fit will help me move more freely and ultimately feel more confident to do my job better."

A new range of clothing is also being introduced. The range is an improvement on the current offering with more sizes and changes to the cut of the garments for a more ergonomic and high-performance fit for all personnel. There will be around 25 sizes of shirt available. By comparison, most high-street shops only provide up to 10 different sizes.

In addition to the new range of clothing, female Army recruits who are beginning their training also benefit from a professional fit and issue service of sports bras.

Defence continues to be committed to improving the lives of women in its ranks and is dedicated to taking bold steps to ensure they have full, thriving and varied military careers. This remains a top priority for Defence and is part of the Government’s response to the Sarah Atherton Report, titled “Protecting Those who Protect us: Women in the Armed Forces from Recruitment to Civilian Life”.