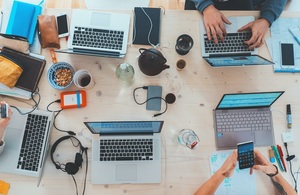 • By comparison, France, Germany, Sweden and Israel has created a combined 85 unicorns by 2020 and only France and Germany raised over £4.3bn in VC funding last year

Four Scottish companies - Amphista Therapeutics in Motherwell; Roslin Technologies in Edinburgh; Interactive Investor in Glasgow; and NuCana BioMed in Edinburgh - are identified as Futurecorns, fast-growing companies set to achieve a $1bn valuation, according to analysis by Dealroom.co and the Digital Economy Council.

Scotland’s futurecorns are part of the huge expansion of the UK tech sector, which has grown 10 fold in the last 10 years, enabling the creation of hundreds of fast growing tech companies across the country, including in Scotland.

Since 2010, the UK has experienced a sustained increase in the venture capital flowing into the tech sector, which has resulted in a huge expansion in the number of startups that are scaling rapidly in sectors as diverse as fintech, food delivery, e-commerce and healthtech. Scottish startups last year attracted £345m in venture capital investment, despite the pandemic and a recent report recognised that 13,000 digital tech job opportunities were created every year in Scotland.

10 years of unicorns and futurecorns

Over the course of 10 years, the number of unicorns - private tech companies valued at $1bn or more - has increased from eight in 2010 to 81 in 2020. Unicorns from 2010 including Betfair, Admiral Group and Ocado are now household names. Scotland has produced three unicorn companies: BrewDog, FanDuel and Skyscanner.

These numbers demonstrate the extent to which the UK is catching up with the US and China in tech, with London now fourth behind the Bay Area, Beijing and New York, when it comes to the number of startups and unicorns created. No other European country has been able to grow at such a speed.

While France has invested millions of euros in its startup ecosystem, in 2020 it had only 17 unicorns, up from zero in 2010. Germany had 1 unicorn 10 years ago and 31 in 2020 - including companies such as insurtech platform Wefox, neobank N26 and travel e-commerce platform Omio.

"Tech companies across the UK are improving our lives through creativity and innovation. With three unicorns and four fast-growing scaleups, Scotland is one of the UK’s leading tech hubs.

"The UK Government is dedicated to supporting investment in tech in Scotland. Our recent commitment to create five new innovation hubs in fields such as robotics and space technology will ensure the industry has a bright future."

"These latest figures show the UK’s tech scene is booming and I’m delighted to see so many of our stellar scale ups racing to becoming the next $1 billion businesses.

"This government is unashamedly pro-tech and we’re investing heavily in world-class digital infrastructure and skills to back talent across the country and bring about a golden age of UK tech."

During 2021, the total number of unicorns and futurecorns has continued to grow. The UK has now created 91 unicorns - private companies valued at $1bn (£718m) or more - which are transforming how we live and work, including Hopin valued at £4bn, Zego, which recently reached unicorn status and Wise, valued at £3.5bn. A further 132 companies are now regarded as ‘futurecorns’ - companies with a value of between $250m (£179m) and $1bn (£718m) - which are on a path to unicorn status.

In Scotland, there are four of these fast-growing futurecorns. These are Amphista Therapeutics in Motherwell, a biopharmaceutical company creating therapeutics that harness the body’s natural processes to remove disease-causing proteins; Roslin Technologies in Edinburgh which is developing pioneering innovations to make the agriculture and animal health sectors more sustainable; Interactive Investor, the online investment platform based in Glasgow; and NuCana BioMed, the pharmaceutical company developing medicines that address significant unmet medical needs based in Edinburgh. Together, these businesses employ over 500 people.

Tech companies across the UK raised a collective £11.3bn in funding last year - with Scottish tech companies raising £345m - 10x the investment raised in 2010 at £1.2bn. That’s more than every other country except China and the United States, and 250% more than the EU’s largest economy, Germany. Since 2015, total UK venture capital investment has been higher in every year than that in France, Germany and Israel. Overseas investors from the US and Asia have been increasingly attracted to the UK’s fastest-growing companies.

Whilst venture capital investment used to be concentrated at early stages, with 64% of funding going to companies at Seed, Series A and B rounds in 2016, for the past two years more than half of VC investment has been at later stages.This is helping to build the UK’s next generation of tech stars, contributing significantly to the maturity of the UK tech sector and the increasing number of potential unicorns across the country.

From:
Office of the Secretary of State for Scotland
Department for Digital, Culture, Media & Sport
Iain Stewart MP