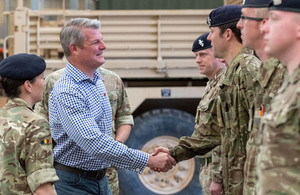 These vehicles offer soldiers, medics and other Army personnel protection from mine and ballistic threats as they navigate rough terrains on the battlefield.

NP Aerospace has secured the £63m contract for the upkeep, update and upgrade of more than 2,200 protected mobility vehicles based in the UK and on operations.

The contract will support approximately 100 jobs in Coventry and 250 jobs across the UK supply chain until 2024. A further 50 jobs will be created at NP Aerospace’s HQ in Foleshill.

"Armoured vehicles save lives on the battlefield and this contract will ensure they are repaired, upgraded and returned to the frontline as quickly as possible.

"This vital contract demonstrates how the MOD benefits every region of the UK by providing hundreds of skilled jobs and multi-million-pound investment to the West Midlands."

As an example, under this contract, a request could be made by Army personnel in Afghanistan to fit a new loudspeaker to a Foxhound patrol vehicle. NP Aerospace will rapidly design, procure and fit the equipment, as well as providing technical advice throughout the contract period.

Other protected mobility vehicles to benefit from the contract include Mastiff, Wolfhound, Ridgeback, RODET, Jackal, Coyote and Husky vehicles, all of which are currently being used by the British Army for either training or operations in the UK and overseas.

"The Protected Mobility fleet has been hugely important for defence over the last 15 years, saving numerous lives on operations. It is vital that we continue to invest in our battle-winning capabilities, ensuring that they are always ready for training or operational purposes."

Given its significant role now and in the future, I am pleased we are partnering with NP Aerospace to deliver this contract”.