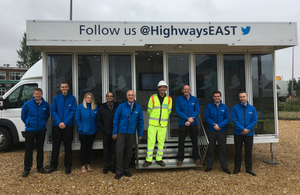 The organisation is using the mobile visitor centre for the second year following 2017’s successful trial to engage with the public, and will give road users and local residents the chance to speak to staff that will be coming to their area, starting with Essex and Suffolk throughout March.

The minibus facility will open out into a larger exhibition, which will feature displays and presentations about road works in the area and road safety.

"We are aware that the work we do has an impact on our road users, and so Highways England is eager to better engage with drivers and local residents so we can hear their comments, allay their concerns and answer any questions they may come to us with.

"This mobile exhibition offers us an excellent opportunity to better get into those communities we will be working alongside, so we can speak with people to explain the work we are doing and the benefits it will bring for them, their town and this region. Last year we had a good response with people coming along to learn about roadworks and share their views, so we hope that interest will continue and grow further in 2018."

In the last financial year (2017/18), Highways England spent £61.4 million on essential maintenance across the East, including £3.5 million on new noise barriers on the M40 in Buckinghamshire, £3.1 million for a new roundabout with Harwich Road and the A120 near Wix, and a £3.5 million repair to the accident damaged Saddlebow Interchange on the A47 near King’s Lynn.

This essential maintenance work is in addition to the longer term investment work, including new dual carriageways on several sections of the A47, widening the A12 in Essex, the £1.5 billion Cambridge to Huntingdon A14 upgrade, and the £4.4 - £6.2 billion Lower Thames Crossing.

Now drivers will be able to speak to Highways England staff about this whole range of road works that are happening soon and further in the future, with £34.4 million committed to maintaining the East’s roads over the next year.

In the next financial year (2018/19), Highways England’s maintenance work will include £2.75 million on resurfacing the A14 between Newmarket and Bury St Edmunds, £2.5 million on bridge repairs on the M1, A14 and A1, £2.25 million on resurfacing the A12, and a further £2.24 million on replacing digital message signs on the same road. Our work in the next year will include laying enough tarmac to fill 20 football pitches, enough white lining to fill an Olympic swimming pool, and enough cats’ eyes to reflect enough light collectively to be seen from space.

In March, the exhibition is set to visit:

The exhibition will then head to Hertfordshire, Cambridgeshire and Bedfordshire in April, before covering the A47 with Norfolk and Peterborough in May.

These dates may be subject to change, and interested visitors are asked to stay up to date with the latest information by following @HighwaysEast on Twitter.

Members of the public are invited to attend the mobile visitor centre to speak with Highways England staff, which will include traffic officers at some of the exhibitions.