More than 1,000 flood schemes to benefit from record investment 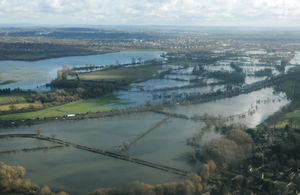 Thousands more homes and businesses are to be better protected from flooding and coastal erosion, as part of plans published today by the Government outlining a record £5.2 billion of investment over the next six years. More than £860 million will be spent in 2021-22 boosting design and construction of more than 1,000 schemes across England as part of the Environment Agency’s annual capital programme.

It is all part of the Flood and Coastal Erosion Investment Plan, published today (Thursday, 29 July), which sets out how new flood and coastal schemes will better protect 336,000 properties by 2027, helping to avoid £32 billion in wider economic damages and reducing the national flood risk by up to 11 per cent. This follows the Environment Agency’s successful delivery of the government’s previous £2.6 billion investment between 2015 and 2021, better protecting more than 314,000 homes.

The funding will be accompanied by a consultation in the autumn, where the Government will look at how to better protect frequently flooded communities, following a call for evidence earlier this year. It will consider how to strengthen the assessment of local circumstances, such as where areas have flooded on multiple occasions, when allocating funding during the six-year plan.

The Government will bring in tighter guidance for planning authorities as part of a package of actions to better protect and prepare communities for flooding. Householders will benefit from changes to the Flood Re Scheme that will allow insurers to pay an additional amount for the installation of property flood resilience measures after a flood - like air brick covers, flood doors and flood resistant plasterboard. Measures to tackle the risks from surface water flooding are also included in the plans.

"The tragic recent events in Germany and Belgium serve as a sobering reminder of how devastating flooding can be.

"We are standing by communities and will bolster defences against flooding across England with many thousands more properties better protected by 2027.

"It’s important we take action right across the system. Our comprehensive plan will achieve this by tightening planning procedures, helping more people access insurance and making homes more resilient to the effects of flooding."

This year will see an extra £250 million spent on flood and coastal defences in 2021/22 compared with last year - the highest ever annual investment. It includes an extra £40 million compared with last year for schemes in Yorkshire and the Humber, a region that has suffered from repeated flooding in recent years, and an extra £53 million for the north west, the region which was hit hardest by Storm Christoph this winter.

"We have seen some devastating flooding around the world so far this summer. No one can prevent all flooding and climate change means the risk is increasing, but we can reduce the risks.

"Having completed the government’s previous six year capital programme on time and on budget, better protecting more than 314,000 homes from flooding and coastal erosion, this year we began the government’s new £5.2 billion flood programme.

"These schemes should provide reassurance to communities and businesses, but no one should have a false sense of security. I strongly urge people to sign up for flood warnings and regularly check flood risk on GOV.UK."

On planning, a recent review of decisions by Defra, the Ministry of Housing, Communities and Local Government (MHCLG) and the Environment Agency found over 97 per cent of planning decisions for residential properties were made in line with Environment Agency (EA) advice in the year 2019/20. However, 866 homes were granted planning permission contrary to EA advice.

New guidance for local planning authorities, designed to drive up compliance with planning rules, will reaffirm that they must refer planning decisions to Ministers when the Environment Agency is sustaining an objection on flood risk. Under the plans, the Government will also consider how planning decisions in areas at risk from surface water flooding could be subject to the equivalent rules in future.

"Flooding has a devastating impact on people’s lives and that’s why we’re strengthening our guidance to ensure the measures are in place to protect our homes and businesses from the risk of flooding.

Our planning reforms will ensure that communities across the country know that future developments will be safe from floods.

"This new guidance will help local communities become more flood resilient by providing local authorities with the right tools to consider how flood risk can be prevented when planning for new homes."

Today’s announcement includes a raft of improvements to Flood Re, the UK-wide scheme which helps homes at risk of flood secure insurance cover. This will allow insurers to help flooded households to make their homes more resilient to future flooding using products such as air brick covers, flood doors and flood resistant plasterboard - and benefit from discounted insurance premiums if they have these installed.

The Government has committed to publish a Property Flood Resilience Roadmap by the end of next year which will further accelerate take-up of property flood resilience measures by identifying action needed from industry and government. The changes follow a government consultation and an Independent Review of Flood Insurance, led by Amanda Blanc, the response to which the Government has also published today.

"Flood Re is successfully delivering on its objective to provide access to affordable insurance for the hundreds of thousands of homes at high risk of flooding in the UK, with 94 per cent of people with prior flood claims now able to obtain quotes from five or more insurers – compared with zero just six years ago.

"But there is still work to be done. Today’s announcement puts Flood Re and insurers in a position to accelerate the delivery of our Build Back Better proposals and benefit more households. Achieving flood resilience requires action from a wide set of stakeholders, so we also welcome the planned publication of the PFR roadmap to provide direction and clarity."

Other action taken includes the Environment Agency working with local authorities to provide better surface water flood risk mapping by summer 2022, which will offer crucial information to an additional 3.3 million people and 1.4 million properties at most risk.

The report published today updates on progress from the Surface Water Management Action Plan and the independent review of surface water responsibilities led by David Jenkins. Together these move us forward in tackling the most widespread form of flooding in England, including strengthening local flood plans and encouraging greater joint working between councils, water companies and other bodies.