Do you want to be a Data Scientist at Dstl? 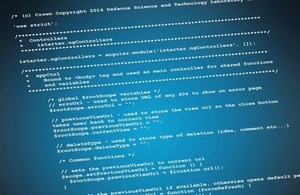 The Defence Science and Technology Laboratory (Dstl) has 12 Data Scientist roles available across its Cyber and Information Systems (CIS) and Defence and Security Analysis (DSA) divisions. The roles involve working as part of multidisciplinary teams, applying innovative solutions to help Dstl answer complex data-led problems for the defence and security of the UK.

Find out more about the Data Scientist roles and apply.

"As a Data Scientist at Dstl you could be using data science skills to collect and analyse intelligence information, support strategic decision makers across government or for work in the area of Artificial Intelligence. Data science is an exciting area to be working in at the moment and no more so than in applying your knowledge to tackle real world defence and security problems."

Dstl has a community of Data Scientists that are already leading the field in the use of Kaggle style competitions to access wider data science expertise from across government, industry and academia. Dstl also led the successful Data Science Challenge, working with the Government Office for Science, SIS and MI5, which challenged the brightest minds in data science to help the UK government meet huge challenges, and keep people safe by revolutionising the way we think about world problems.

In 2014 Dstl Data Scientists placed a piece of software, called Baleen, into the open source domain, via Github, for editing and improvement by the public. By releasing Baleen, which was built on open source technologies and bespoke Dstl developed software code, to the open source community Dstl could reach non-traditional expertise and enhance the output of the tool.

Through the Ministry of Defence, Dstl also has a strategic relationship with the Alan Turing Institute, the national institute for data science which is headquartered at the British Library. The relationship is interested in developing data science methodologies and techniques, and in the direct application of data science for the benefit of defence and security. It enables Dstl Data Scientists to share data science knowledge and skills with other members of the Institute, meaning that our data scientists always have access to best practice and can develop the skills they need.

Read a case study about Charlotte, one of our Senior Data Scientists, and find out more about Dstl’s Data Academy, an intensive course and ‘final challenge’ which gives staff lab time to broaden their knowledge of data science.