UK engineers have completed the assembly of the European Space Agency’s (ESA) Rosalind Franklin rover, which will seek out signs of life on Mars 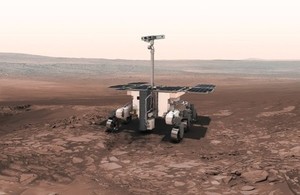 Rosalind Franklin, which is the result of cutting edge work from UK, European and Canadian scientists and engineers will now be shipped from the Airbus factory in Stevenage, Hertfordshire to Toulouse in France for testing to ensure it survives its launch from Earth next summer and the freezing conditions of Mars when it lands on the planet in March 2021.

The rover is part of ESA’s ExoMars mission to examine the geological environment on Mars and search for signs of life, past or present.

"This is a major milestone for this exciting project which demonstrates the UK’s leading capabilities in robotics, space engineering and exploration, as well as our ongoing commitment to the European Space Agency.

"As we hand the rover over to France for final testing, we should celebrate the huge efforts of the hundreds of people across the UK who have been involved in the design and build of the rover and its instruments, which will look for life on Mars."

Last week the panoramic camera system which will allow the rover to ‘see’ was successfully fitted. With funding and support from the UK Space Agency and European Space Agency (ESA), PanCam was developed in Britain by scientists from UCL’s Mullard Space Science Laboratory (MSSL), working with the University of Aberystwyth and dozens of other experts across the UK in partnership with colleagues in Switzerland, Germany, Austria and scientists from nine nations.

UK scientists from the University of Leicester and Teledyne e2v worked on the rover’s Raman Spectrometer, a powerful tool for the identification and characterisation of Martian minerals. The UK Science and Technology Facilities Council provided electronics, including the data processing board.

"Seeing the Rosalind Franklin rover finally leave Airbus in Stevenage is a great moment, and I would like to thank all the teams involved for their efforts in making this happen. This European flagship mission now moves to the next stage for final testing and one step closer to launching to the Red Planet next summer."

ExoMars is an ESA program in cooperation with Russian Space Agency Roscosmos with contribution of NASA. Thales Alenia Space is the key Exomars mission industrial partner, supported by Airbus Defence and Space for the rover vehicle, OHB for the carrier module, Lavochkin for the descent module and its surface platform, while Leonardo has provided Rosalind Franklin’s drill.

The UK Government is backing businesses to succeed by increasing investment in science to 2.4% of UK GDP by 2027, because countries that invest in ideas create more opportunities for business. The ambition is for the UK be the world’s most innovative economy – and our leadership in ESA is a part of this ambition.

The UK Space Agency is the second largest European contributor to the ESA-Roscosmos ExoMars mission, having invested €287 million in the mission and £14 million on the instruments. This, in addition to successful negotiations with ESA, secured key mission contracts for the UK space sector.

"Completing the build of the Rosalind Franklin rover under the strict cleanliness requirements, with all the science instruments onboard, is a major milestone of our ExoMars programme. It is thanks to the dedication of all the teams involved that we are able to celebrate this moment today.

"We’re looking forward to completing the final rounds of tests before the rover is declared flight ready and closed inside the landing platform and descent module that will deliver it safely to the surface of Mars."

The UK’s investments in ESA are strengthening the UK’s national capability in space, which is fundamental to modern day life, from weather forecasting and satellite TV, to communications and monitoring climate change.

The UK will make ambitious new subscriptions to ESA programmes in November, which will strengthen capabilities further and ensure the UK plays a significant role in global efforts to return humans to the Moon, bring back the first samples from Mars and develop innovative new technologies for life on Earth.

ESA is an international organisation with 22 Member States. By coordinating the financial and intellectual resources of its members, it can undertake space programmes and activities far beyond the scope of any single European country.

ESA’s Ministerial Councils bring together ESA’s Member States every two to three years to decide on new proposals and funding for ESA’s next years of work. The next one, called ‘Space19+’, will be held in November 2019.