NHS dentists and doctors in England will receive a 2.8% pay rise, backdated to April 2020 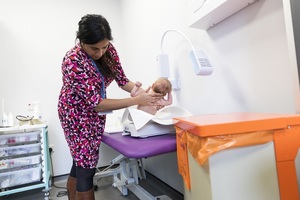 • Government accepts in full the recommendations in the latest Review Body on Doctors’ and Dentists’ Remuneration report
• 2.8% pay rise for NHS doctors and dentists in England, backdated to April
• Uplift is in line with the NHS Long Term Plan’s funding settlement of a record £33.9 billion extra by 2023 to 2024

The government has accepted in full the pay recommendations in the latest Review Body on Doctors’ and Dentists’ Remuneration (DDRB) report, which considers a range of evidence from the NHS and trade unions.

This pay award is worth, in basic pay:

"These past few months have been an incredibly challenging time for our NHS, and the resolve, professionalism and dedication of staff has been on show throughout.

"We are able to accept the recommendations of the independent pay review body for dentists and doctors.

"I am committed to supporting the entire NHS and social care workforce through improved recruitment and retention and delivering 50,000 more nurses and 6,000 more doctors in general practice."

The uplift is in line with the NHS Long Term Plan’s funding settlement of a record £33.9 billion extra by 2023 to 2024 and will build on the NHS Interim People Plan’s ambition to make the NHS the best place to work.

It follows the settlement for more than one million NHS workers who continue to benefit from the 3-year Agenda for Change pay deal agreed with NHS trade unions. Under this deal the starting pay for a newly qualified nurse has increased by over 12% since 2017 to 2018 and all nurses have received pay increases of at least 6.5%.

The NHS Pay Review Body, who cover Agenda for Change staff, is expected to return to making recommendations for next year’s pay awards.

For specialty doctors and associate specialists (SAS doctors) the government recognises the DDRB’s comments on the need for improved recognition and career development. Negotiations on a multi-year pay and contract reform deal for this group of doctors are progressing, and agreement is expected to be reached in time for the next pay year.

For salaried GPs, the minimum and maximum pay range will be uplifted by 2.8% in line with DDRB’s recommendations.  The DDRB were not asked to make a pay recommendation for contractor GPs or doctors and dentists in training as both groups are in the second year of their respective multi-year deals. For junior doctors, each year of the deal there is an annual basic uplift of 2% and all junior doctor pay scales will have increased by 8.2% by the end of the deal.

The DDRB has a standing remit to consider what pay uplifts are necessary for the NHS to continue to recruit, retain and motivate its staff whilst taking account of affordability. The DDRB considers a range of evidence from different stakeholders including NHS system partners and trade unions.

The government acknowledges the DDRB’s comments on Clinical Excellence Awards for consultants, and their reasons for not recommending an increase in their value relating to equality of distribution and access to awards. With this in mind, we will progress plans to reform these awards with a view to introducing new arrangements from 2022.

The minimum and maximum of the pay range in the model terms and conditions for salaried GPs will be uplifted by 2.8%. As self-employed contractors, it is largely up to GP practices how they distribute pay to their employees. Employers have the flexibility to offer enhanced terms and conditions, for example, to aid recruitment and retention.

The multi-year GP contract provides funding clarity and certainty to practices for 5 years (2019/20 to 2023/24). On top of significant investment, the multi-year GP contract also sought to address workload by providing additional staff though the Additional Roles Reimbursement Scheme and the introduction of the state-backed scheme for GP indemnity which started in April 2019.

General dental practitioners will receive a 2.8% general uplift in the pay element of their contract backdated to April 2020.

For doctors and dentists in training, their current multi-year deal means all junior doctor pay scales will have increased by 8.2% by the end of the deal, and in addition around £90 million is being invested to reform the contract, including to create a new, higher pay point to recognise the most experienced doctors in training.