The next stage of electrification on the Midland Mainline starts, ultimately bringing quieter trains, greater decarbonisation and better connectivity in the region 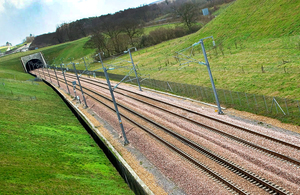 • work begins on rail projects to slash journey times between towns and cities like Sheffield, Leicester, Chesterfield, Nottingham and London and between Leeds and Manchester

• under the Integrated Rail Plan, rail journeys will be transformed across the North and Midlands, creating a commuter culture to rival that of London and the South East

• plan backed by biggest ever government investment in rail – £96 billion to create high-speed lines, upgrade existing ones and rolling out Oyster-style pay-as-you-go tickets

Just a month after announcing £96 billion of rail investment for the North and Midlands, work is already starting on the Integrated Rail Plan with the launch of the next stage of Midland Main Line electrification.

Main works to electrify the Midland Mainline between Kettering and Market Harborough will start on 24 December 2021, laying the foundation for the planned upgrade of the line all the way to Sheffield and Nottingham and setting the starting gun for quieter trains, greater decarbonisation, better connectivity and more local services across the region.

Today (21 December 2021), on a visit to the Leicester hub of Network Rail contractors SPL, the Transport Secretary saw wiring gantries being built for the Midland Mainline and met with staff to mark the launch of the biggest ever government investment package for the North and Midlands, which will boost opportunity and support job creation across the regions.

The Integrated Rail Plan is the blueprint for the government’s commitment to building better transport links, generating prosperity and opportunity across the North and Midlands up to 15 years sooner than previously planned, all while delivering on levelling up the country.

Works over Christmas and the New Year between Manchester Victoria and Stalybridge will speed up the electrification and resignalling of the railway and renew the track, which is a critical stage in the Transpennine Route Upgrade (TRU). This will pave the way for delivering passengers in Greater Manchester faster, more frequent and more reliable trains.

"Last month, I promised we would get on with delivering the Integrated Rail Plan by Christmas and that’s exactly what we’re doing.

"Today marks the beginning of a transformation of rail journeys for the Midlands and the North, where we will slash journey times and build better connections between towns, cities and everywhere in between.

"Under our plans, people won’t have to wait 2 decades for better services. This unprecedented investment will deliver better railways sooner."

As the first part of Northern Powerhouse Rail, TRU will transform the railway between York and Manchester, delivering more reliable and comfortable services while cutting journey times between 2 of the economic powerhouses in the North – Manchester and Leeds – first to 41 minutes then eventually to 33 minutes. Full electrification of TRU will also increase capacity on the network by more than 90%.

The Integrated Rail Plan will cut journey times from Chesterfield to London to 76 minutes, Derby to London to 58 minutes and Nottingham to London to 57 minutes. Passengers will also see services and capacity nearly doubled, making travelling by train more convenient and comfortable.

It will also deliver more seats, more frequent services and shorter journey times, and ensure benefits are not just for those travelling between the centres of the biggest cities, but also between smaller towns and communities across the North and Midlands.

It also provides £360 million to roll out a programme of fares, ticketing and retail reform including the rollout of contactless pay-as-you-go ticketing to 700 stations in urban areas, including around 400 in the North.

The government will also drive towards rolling out digital ticketing across the whole network.

Silviya Barrett, Head of Policy and Research at Campaign for Better Transport, said:

"This is good news for passengers who will benefit from quicker journeys and better connections, and also good news for the planet. Electrifying more of the railway is key to helping make one of our greenest forms of transport even greener."

"It is great to see the government putting the Integrated Rail Plan into action so quickly after the report was released. Extending the Midland Main Line electrification is an early Christmas present to the region and is the first step towards giving the East Midlands the transport infrastructure it deserves.

"Our job now is to build the infrastructure around it with HS2 trains coming to Derby and Nottingham through East Midlands Parkway and our flagship project the Midlands Rail Hub progressing well, too.

"Today’s news is testament to local councils, businesses and MPs who have successfully made the case for upgrades on the Midland Main Line for years and the Department for Transport for working with us. Today is a good day for the Midlands as spades start to go into the ground."

"It’s our pleasure to welcome the Secretary of State to Leicester. This next phase of electrification will bring real benefits to passengers and the communities we serve in the East Midlands. Teams will be working throughout Christmas to install the equipment which will carry the electric wires as far north as Market Harborough."