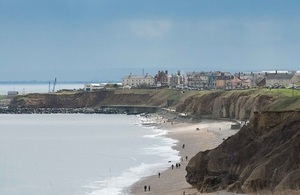 As families across the country embark on a traditional Boxing Day walk, new figures out today (26 December) reveal the huge popularity of England’s coastal paths with 29.1 million walking trips made over a six-month period, boosting local economies and bringing health and wellbeing benefits to visitors.

The never-before-released data was collected by Natural England – the government’s adviser on the natural environment. It shows the significant value of coastal walking for health and wellbeing, with 97% of people feeling refreshed and revitalised as a result of their visit.

Natural England is currently establishing a 2,700-mile path around the entire English coastline. Walkers will be able to enjoy, explore and experience some of our finest and most important cultural and natural heritage – from the white cliffs of Dover, to the industrial heritage of the North East. When completed, the England Coast Path will be the longest continuous coastal walking route in the world.

“The popularity of the English coast is fantastic news for the millions of people who visit, work and live along it, and there is no better way to relax and enjoy the natural environment than by walking along our beautiful shores.

“We are committed through our 25 Year Environment Plan to encourage more people connect with nature, and I encourage everyone who can to get outside during the festive period to enjoy the outdoors.”

England’s wonderful coastline is a national treasure. This research reveals how the coast brings people closer to our magnificent wildlife, contributes to local economies while promoting our health and wellbeing.

Our flagship England Coast Path is taking people through some of the finest and most important landscapes in England, opening up access to historic landmarks, natural wonders and breath-taking scenery, enabling more visitors to experience, recognise and value the benefits of our environment.

"As a nation of islanders, our coastline holds a special place in many of our hearts. We know that people seek out coastal places – to experience the beautiful landscape, as somewhere peaceful to pause, or simply to spend time with family and friends. The National Trust’s long running work to protect our coast has given us a deep insight into the benefits that spending time by the sea can bring.

"We welcome the findings of this research, which emphasise the importance of caring for the coast and making sure it is rich in natural beauty and cultural significance, where both nature and people can flourish."

Gemma Cantelo, Head of Policy and Advocacy for the Ramblers, said:

"There’s something really special about walking near the sea and it’s wonderful to see that England’s coastal paths have a place in the hearts of millions of walkers. We’re immensely proud of our dedicated volunteers who have worked tirelessly to support Natural England’s fantastic work.

"At a time when we’re facing a climate emergency, rising obesity levels and a mental health crisis, this report highlights the difference National Trails can make in enabling more people to connect to nature and enjoy the physical and mental health benefits of walking our beautiful coastline, as well as the significant economic boost they bring to local communities. This important report once again demonstrates that investment in walking is money well-spent."

Today’s study, which collected data from July 2017 and January 2018, will provide a baseline to help evaluate the benefits of English coast paths to local economies and communities..

Once complete, the England Coast Path will become a National Trail – the nation’s finest and most popular long-distance paths. It will be a continuous, easy-to-follow, well-maintained walking route which is being carefully designed to help with managing recreation alongside other land uses.

The work connects long-established national trails such as the 630-mile South West Coast Path with new sections such as the 58-mile stretch between Minehead and Brean Down in Somerset. The most recent part of the path opened in September 2019, increasing access to the Tees Valley coastline with a 10-mile route from Newport Bridge to North Gare.

The number of visits to the path were estimated using data from: automatic people counters (managed by Natural England); a survey of 2,000 people walking on English coastal paths conducted for the purpose of the study; and counts of visits made during the survey.

The data was collected through a survey undertaken between July 2017 and January 2018 at 32 locations on coastal paths around England. The locations used for the survey were selected to represent the diversity in English coastal paths and their use.

The Marine and Coastal Access Act 2009 places a duty on the Secretary of State and Natural England to secure a long distance walking trail around the open coast of England, together with public access rights to a wider area of land along the way for people to enjoy.

The England Coast Path will be our longest, newest and most challenging National Trail, passing through some of our finest countryside and coastal locations.

It will secure legal rights of public access for the first time to typical coastal land including foreshore, beaches, dunes and cliffs.