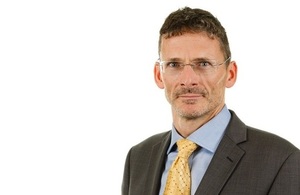 The Chairman of the SSRO, George Jenkins OBE, said that:

"This is a vital appointment for the SSRO. The new Chief Executive will drive forward our positive momentum, focusing on the delivery of our statutory functions and ensuring our independence, while engaging meaningfully with all our stakeholders. The Board and Neil share the same vision, and he demonstrated against tough competition that he meets the skills, knowledge and experience criteria we need. I would like to thank my fellow panel members for their significant contribution to the recruitment process, and for arriving at the best decision for the SSRO."

The shortlisting and interview panel comprised: George Jenkins OBE as the SSRO Chairman; Catherine Little, DG Finance at the Ministry of Defence; Paul Everitt, Chief Executive of ADS; and Marta Phillips, a non-executive Board member at the SSRO. Interviews were held at the SSRO offices on 1 May 2018 and the panel determined its recommended candidate at that time. The recruitment was undertaken by the SSRO, in conjunction with Odgers Berndtson, which approached potential applicants regarding the role and coordinated the exercise.

The SSRO was founded under the Defence Reform Act in 2014. It is an executive non-departmental public body, sponsored by the Ministry of Defence.

"It is a privilege to be appointed Chief Executive, and I am grateful to the panel and Board for considering my application. The SSRO plays a key role in the regulation of non-competitive defence contracts, providing independent, objective and evidence-based advice, guidance and support. Working with and listening to its stakeholders the SSRO is well placed to support improvements in defence procurement. I intend to build on the foundations that have been established as the regime further matures – ensuring the SSRO does its job and does it well."