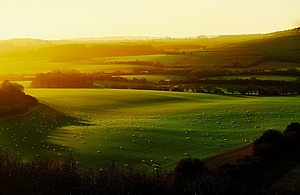 Environment Secretary George Eustice has today (Tuesday 25 February) called on farmers and land managers to share their views on the government’s flagship green farming scheme outside the EU.

Speaking ahead of the National Farmers’ Union’s (NFU) annual conference tomorrow (Wednesday 26 February), the Environment Secretary has announced that farmers will be at the forefront of reversing environmental declines and tackling climate change as they reshape the future of farming in the 21st century.

The government will today publish new details on its future Environmental Land Management Scheme (ELM), which will see farmers paid for work that enhances the environment, such as tree or hedge planting, river management to mitigate flooding, or creating or restoring habitats for wildlife.

Moving away from a system that pays farmers for the total amount of land farmed, the scheme will instead pay for ‘public goods’ that benefit society, such as clean air and water.

In his speech at the NFU Conference tomorrow, Environment Secretary George Eustice is expected to say:

"We can all agree that we want British farming to be sustainable in the truest sense of the word, an industry which is profitable, competitive, and productive while feeding the nation and taking care of our landscapes too.

"This week we’ve published more detail on our plans for the future and specifically on Environment Land Management, outlining how we hope to work with our farmers, and what to expect.

"Now more than ever, efforts for the environment are absolutely critical, and no group has more power to reverse environmental decline than our farmers."

The new proposals unveiled today will include three ‘tiers’ of entry to the scheme, enabling anyone from any farm or land type to participate at the right level.

Tier one would encourage farmers to adopt environmentally sustainable farming and forestry practices, while farmers, foresters and other land managers in tier two would focus on delivering locally-targeted environmental outcomes. The third tier would pay for larger-scale, transformational projects – such as restoring peatland.

Farmers and land managers will have 10 weeks to have their say on the details of the new scheme, with government capturing their knowledge and experience to ensure it does not repeat the mistakes of the EU’s burdensome Common Agricultural Policy (CAP). This will be supported with a number of regional events across the country for knowledge sharing between farmers, land managers and foresters and Defra officials designing the scheme.

The government has today also published a future farming policy update, as the Agriculture Bill goes through the Committee Stage in the House of Commons. This sets out how future policies will be designed to ensure increased productivity goes hand in hand with environmental initiatives, with further detail on issues including:

• Productivity: From 2021, new government grants will help farmers to invest in equipment and technology which will help them to increase their productivity and deliver environmental benefits.

• Research & Development: From 2022, Defra will support research and development projects to help our farming industry benefit from innovation, enabling farmers to produce food more efficiently and sustainably with lower emissions.

• Animal Health and Welfare: A new deal will be struck between government and farmers to promote the production of healthier, higher welfare animals, with publicly-funded schemes available for farmers to deliver animal health and welfare enhancements which go beyond regulatory requirements and which are valued by the public but not sufficiently provided for by the market.

The Secretary of State’s speech at the NFU conference will be live-streamed from 8am. Details on how to stream the speech.

The Environmental Land Management Scheme discussion document will be open for views on Citizen Space, and the future farming policy update will be available to read in full on GOV.UK.