By Secretary of State for BEIS, Alok Sharma 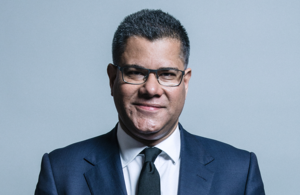 On 2 July 2018, a £100 million satellite called CryoSat-2 was completing its daily rounds of monitoring ice caps back on Earth from an orbital vantage point 700 kilometres above us, when mission controllers spotted a chunk of space debris hurtling towards it at 17,000 miles per hour.

To avert a potentially catastrophic collision, engineers fired up CryoSat’s thrusters and moved it out of harm’s way. This near miss was not the first, and it will not be the last.

An estimated 20,000 pieces of space debris, better known as ‘space junk’; are whizzing around the Earth as you read this. This includes zombie satellites and whole junkyards’ worth of whirling fragments left over from space missions.

Without the right protection, a four-inch piece of space junk could breach the walls of a satellite and smash it into thousands of parts, and in doing so, set off a chain reaction that could see a cascade of collisions that expands many years.

This chain reaction is known as the Kessler Syndrome, after the space debris expert Don Kessler, who predicted in 1976 that the space around Earth could become so riddled with junk that launches become impossible and vehicles that entered space would quickly be destroyed.

And this risk of a catastrophic collision is only going up, with the amount of junk in low orbit increasing by 50% in the last five years. Put simply, the plot to the sci-fi thriller Gravity could become our reality in space.

Satellites are critical to our everyday lives - they keep us connected to families and loved ones during a pandemic, they track and give us insights on climate change, and they tell us if we will need to take an umbrella on our lunch break.

While satellite operators can dodge large pieces of debris and armour satellites to withstand the impact of smaller fragments, with the need for a growing number of satellites in orbit we need to be able to monitor the space highways and to gradually clear it of obstructions.

But if we do not take action now, low-Earth orbit could become impossible for satellites to navigate and perhaps it might become too perilous for astronauts to live on the International Space Station.

If we want to continue to reach for the stars in the years to come and realise our ambitions to use satellite technology to improve lives on Earth, we need to clean up our act.

That is why I am delighted to announce over £1 million in government funding for seven of the UK’s most pioneering space projects that will help monitor hazardous space debris and protect the vital services we rely on every day – from mobile communications to weather forecasting.

And although at present we do not own a celestial broom or a tractor beam that can wipe out each bit of detritus, the companies we are backing are developing technologies like artificial intelligence and sensor technology, that will help up our game in spotting these risks and taking evasive action.

We are championing new ideas in the form of London-based Lift Me Off which is developing, and testing machine-learning algorithms designed to distinguish between satellites and space debris using thermal infrared and optical cameras. Artwork: D-Orbit UK, one of the companies receiving funding

Meanwhile Andor, based in Northern Ireland, will use a scientific detector camera to help the astronomy community track debris which can interrupt ground-based astronomy.

Another project will draw on the expertise of Fujitsu and Amazon, as well as Astroscale, to improve the commercial viability of missions that seek to remove debris – clearing the space highway.

And they all demonstrate the very best of UK science and innovation – bringing together the country’s brightest minds, taking us beyond the reaches of our own home planet to tackle some of our greatest challenges now and into the future.

At the World Commission on Environment and Development in 1987, world leaders defined sustainable development as ‘meeting the needs of the present generation without compromising the ability of future generations to meet their needs’.

In space, this test has yet to be met. Only by tapping in to the UK space sector’s growing expertise we will ensure we make this a reality.