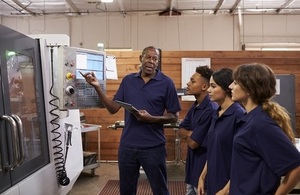 Adult training is often only available for workers who are already highly paid or highly skilled, a new report from the Social Mobility Commission reveals today (29 January 2018).

About 30% of those employed in managerial and professional occupations participated in training in the last 3 months compared to 18% in routine and manual jobs. This follows earlier research showing that half (49%) of adults from the lowest socio-economic group receive no training at all after leaving school.

In contrast, high-skilled workers tend to benefit from ‘a virtuous circle’ of frequent in-work training and pay increases, says the research carried out by the Institute for Employment Research, Warwick University. Professional or managerial workers are twice as likely to be sent on courses as other workers, while graduates are 3 times as likely to access training as those with no qualifications.

An individual’s background also has an impact. Workers whose parents came from disadvantaged backgrounds are less likely to benefit from adult training – which can impact on social mobility. Employees from more privileged backgrounds are more likely than other low-skilled workers to take advantage of in-work learning to rise up the ranks.

"Too many employers are wasting the potential of their employees by not offering training or progression routes to their low and mid-skilled workers.

"Both employers and the government need to act to address this problem. They should start by increasing their investment in training, to bring it closer to that of international competitors, and prioritise this to those with low or no skills. Doing this would benefit both business and the economy as a whole."

The commission has previously found that 1 in 4 of the UK’s low-paid workers will never escape low pay – a problem due largely to low skill levels. Yet the UK lags behind other countries in giving adults a second chance to learn new skills and achieve their potential. The UK spends just two-thirds of the European average on adult training, and investment is in decline. Between 2010 to 2011, and 2015 to 2016 government funding for adult skills fell by 34% in real terms.

The problem is that employers fund 82% of all UK training and tend to prioritise senior, high-skilled employees. Most other training is paid for by individuals themselves – if they can afford it. Free courses run by government make up just 3% of all accessed training courses.

The result is a system with vast numbers of low-skilled workers with little opportunity to build skills and escape low pay. This urgently needs rebalancing – for productivity as much as social mobility, says the commission.

"A lack of ongoing training for low-paid workers is a contributing factor for millions to a lifetime of poorly-paid work. As we prepare to leave the EU, it is more important than ever for us to build relevant skills to improve the UK’s productivity. That is why we want to see more investment in life-long learning and adult education – including enabling more courses to be available for those who cannot afford them."

"This report shows a ‘virtuous’ and a ‘vicious’ cycle of learning, whereby those with low or no qualifications are much less likely to access education and training after leaving school than those with high qualifications."

"These findings should act as a wake-up call for employers to look a lot harder at how they are developing their workforce for the future. Building skills at all levels and roles is essential to improving productivity and performance, for engagement and retention of employees, and to highlight and support progression opportunities. However, many of these are longer term outcomes and too often the focus for training is on short term job needs."

• previous research has shown that half (49%) of adults from the lowest socio- economic group receive no training at all after leaving school, compared to 20% from the top group

• overall investment in adult skills from employer, government and individuals was around £44 billion in 2013 to 2014 – government funds just 7% of this training