Funding to transform the UK’s coastal communities through investment in jobs, skills and local businesses opens for bids 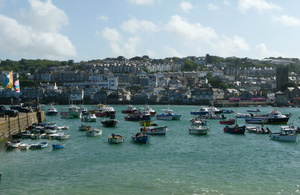 500 new businesses supporting 5,500+ plus jobs have been created thanks to the government’s Coastal Communities Fund.

The opening of the next £40 million round of applications was announced by Coastal Communities Minister, Jake Berry, while visiting Barrow-in-Furness to see first hand how the fund has delivered major economic benefits for the Cumbrian town and wider coastal area.

"I’m delighted to announce that applications are now open for the next round of the Coastal Communities Fund.

"Coastal Communities up and down the country from Barrow-in-Furness to Brighton have been boosted by this funding which has spurred inward investment, sustainable growth, new jobs and exciting economic opportunities for local businesses.

"By 2020, we’ll have invested nearly a quarter of a billion pounds in our seaside areas, providing thousands of jobs, training places and opportunities along the Great British Coast."

Since 2012, the government’s CCF has awarded grants to 295 projects across the UK, totalling over £174 million. Analysis shows this has been money well spent, with every £1 invested having the potential to create an up to £8 boost to our coastal economies. Successful projects have included:

• Cornwall council receiving a £1.95 million grant in 2014 to repair and re-launch the Grade II Listed Art Deco ‘Jubilee Pool’ in Penzance to create an all year round visitor attraction sustaining existing jobs and creating new positions (including much needed apprenticeships in an area with higher than average youth unemployment).

• In January 2015, Blackpool city council received a £2 million CCF grant towards the “Lightpool” project to deliver a radical transformation of the iconic Blackpool Illuminations, creating a compelling new visitor experience and a major boost to the local economy. The project is forecast to have increased visitor numbers by 2.6 million.

• The Tate St Ives was awarded a £3.87 million grant in 2015 to refurbish and extend the Tate Gallery in St Ives. The new facilities include a new apse gallery connecting the existing gallery to the new extension; a new suite of learning and event spaces; increased capacity for visitors in the reception, cloakrooms, café, new exhibition space, staff accommodation and training space.

• Amble – the seafood town – Northumberland. Northumberland county council was awarded a £1.8 million CCF grant in 2014 to improve the economy of Amble through infrastructure works to transform the town into a visitor destination promoting seafood, attracting new visitors and creating jobs. The project has provided two new restaurants, improved facilities incorporating a Harbour Village with retail space, and enhanced access along the shore.

Barrow-in-Furness has also benefitted from multiple rounds of coastal communities funding which has completely revolutionised business support in the coastal area from north of Millom across the Furness peninsula to Grange.

• £900,000 in CCF round 1 (2012) being granted to Furness Enterprise Limited to create an innovation network which seamlessly connects local businesses with each other to streamline their supply chains. The funds also supported marketing of key sites, formation of 70 new start-up businesses and help to SMEs in providing training opportunities for unemployed residents to gain the skills they need to find a permanent job.

• £865,000 in CCF round 3 (2015) to Furness Enterprise Limited to accelerate regeneration in Barrow and the surrounding areas by strengthening supply chains and transforming skills as well as attracting inward investment and helping to provide specialist businesses support to local companies to up-skill and grow.

• A pilot scale internship scheme placing young people in high tech firms. This led to the OGDEN Trust agreeing to fund 60 placements from 2018 to 2020.

• £444,000 in CCF round 4 (2017) to Barrow and Furness Coastal Communities Team to transform visitor facilities on Walney Island and covert an old, derelict built into a community run visitor hub.

Prospective applicants for round 5 of the Coastal Communities Fund can access the full guidance to submitting their application on GOV.UK.

We are also looking to fund a small number of revenue projects which are ‘ready to go’ and can be fast tracked. Successful fast-track projects will be announced in summer 2018 and we will expect them to be able to start quickly.