Government urges public to make a difference and join the police

The government’s campaign to recruit an additional 20,000 police officers enters a new phase today with a clear message: make your difference 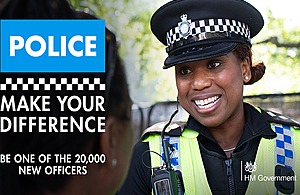 TV commercials highlighting policing’s central role in the community will air today, alongside fresh social media adverts designed to attract applicants from a variety of backgrounds.

The campaign aims to capitalise on the community spirit shown by the British public during the coronavirus pandemic, which presents an unprecedented opportunity for people to make a difference by joining the police.

Thousands of additional officers have already been recruited and are supporting the emergency services’ response to the virus.

"Getting more police officers on the streets to keep us all safe is an absolute priority for the British people – and this government.

"The heroic efforts of officers up and down the country have been crucial in protecting the NHS and saving lives during this pandemic.

"There’s never been a better time to join the police to make a difference in your community."

The Home Secretary recently held a call with new recruits from Lancashire Constabulary, who told her that they had the “best job in the world” and that a career policing was “more important than ever” in the face of the coronavirus pandemic.

More than 3,000 additional officers joined the police’s ranks from the beginning of the campaign to the end of March 2020, putting the government on track to meets its target of 6,000 by March 2021.

Since then police forces have been reporting an increase in applications amid the coronavirus pandemic.

West Midlands Police has seen record numbers apply to be student police officers, 75% higher than its normal average, with as many women applying for this role as men – a first in the force’s history.

"This TV commercial is an exciting first for policing, informing a wide TV audience that we continue to recruit for police officers. We want everyone to know that we are open for recruitment.

"The pandemic has presented everyone with new challenges but it is essential that we continue to build our policing capacity by attracting and training new police officers. Now is a great time to consider whether you could make your difference by joining our ranks."

The College of Policing has also recently announced the rollout of new online assessment centres, which will ensure that recruitment continues at pace during the coronavirus outbreak.

The online assessment process will take candidates through situational judgement tests, briefing exercises and interviews. Forces are already trialling this platform and the service will be available to forces in England and Wales from June.

New recruits are receiving prioritised training so they can be safely deployed to the frontline and support the police’s emergency response in 7 to 8 weeks, rather than the usual 12 to 16.

"Being a police officer was a childhood ambition and I am proud to wear the uniform.

"No two days are ever the same, each day you learn and expect the unexpected. But the thing I love most about my job is helping other people and making a real difference.

"I would encourage anyone, from any background, to consider joining and serving within the policing family."