Boosting value for money in the council finance system 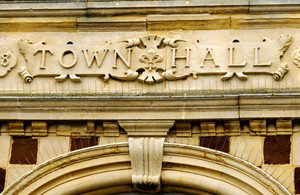 Plans to strengthen council finances, reduce risk to public funds and ensure councils are delivering value for money for taxpayers have been published by the government today (28 July 2021).

Changes to the capital finance system will see improvements in the way that risks are monitored and will drive effective decision-making and ensure council funds are spent effectively.

Local Government Minister Luke Hall has announced the changes in a drive to boost public trust and ensure that residents are receiving the quality of services they deserve as we build back better from the pandemic.

Also confirmed today is a new consultation on our proposals for how the new regulator, the Audit Reporting and Governance Authority (ARGA), should act as the system leader for local audit within a new, simplified local audit framework.

It also includes proposals for how the government intends to implement other areas of the Redmond Review, which was an independent review by Sir Tony Redmond into the effectiveness of external audit and transparency of financial reporting in councils. These include:

• strengthening the ways that the findings of audit are used by local bodies, including proposals for the inclusion of independent members on local audit committees

Alongside this consultation, we have published two responses to previous local audit consultations – allocating £15 million to local bodies to help with the costs of audit, and changes to regulations that will help to provide greater flexibility in payments for audits, both of which show significant support for the government’s proposals.

The government continues to work closely with stakeholders, including local bodies and audit firms, to refine proposals for implementing our commitments around system leadership, as well the range of other commitments we have made in response to the Redmond Review.

"Throughout the pandemic, we have worked closely with councils to ensure they have the resources they need to deliver vital services for their communities.

"As we build back better, we are strengthening the local audit system, to deliver value for money for taxpayers, support sound investment decisions and sustain public confidence in local government."

The government will continue to monitor the sector, and keep under review whether further action and reform is needed. We will also be engaging with local authorities, and other bodies, as we develop the actions for oversight and intervention, to ensure capital framework remains fit for purpose.