34 satellites launched in one night 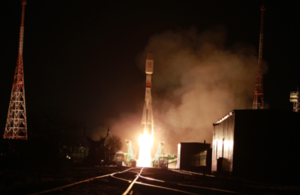 The UK-based company aims to bring worldwide internet coverage and received £18 million of UK Space Agency funding through the European Space Agency (ESA) for the development of its next generation satellite constellation.

This investment also supports the development of novel automation techniques and artificial intelligence to manage the spacecraft and their interaction with terrestrial networks to deliver global 5G connectivity.

The launch, from Baikonur in Kazakhstan marks the start of one of the largest civilian launch campaigns in history, which aims to create a constellation of 648 satellites.

"There is huge commercial potential for a cost-effective worldwide telecoms satellite system, and the UK space sector is playing a leading role in delivering it, building on our world-leading capabilities in satellite telecommunications, connectivity and data. Satellite telecoms are central to bringing fast responsive services to people and communities right across the UK and around the world.

"Responsible growth means that we recognise the importance of protecting the space environment and are the leading investor in ESA’s space safety and security programme, which includes a new mission to help remove space debris."

OneWeb, which has its Global Operations Centre in White City, London, plans to provide its first customer demonstrations by the end of 2020 and full commercial global services for sectors such as maritime, aviation, government and enterprise in 2021.

The UK Space Agency licensed the 34 satellites for launch and regulates the use of space by UK organisations and individuals through the Outer Space Act 1986. This process requires satellite operators to demonstrate they have considered any associated risks and have safeguards in place, such as the ability to manoeuvre satellites to avoid debris and other spacecraft, and to de-orbit them at the end of their lifetime.

The UK continues to be a leading member of ESA, which is independent of the EU, having committed a record investment of £374 million per year in November 2019, including £250 million for ESA’s telecommunications programme and £80 million in the space safety and security programme – more than any other ESA member state.

The UK space sector employs 42,000 people and generates an income of £14.8 billion each year, with the value of exports standing at £5.5 billion.